One of the core issues with American television programming is that financial concerns often dictate a show ending either too early or cause it to go on for far too long. While it’s always frustrating to see a show cut down in its prime or before it can really get going, that situation does at least cause the show to leave a good taste in the viewers’ mouth. A show that far outstays its welcome can be infinitely more frustrating and can do a ton of damage to a show’s legacy.

The [American] Office is sadly a case of the latter. While few people doubt that the show’s prime was during that season 2-5 sweet spot (though opinion varies greatly in regards to which season during that time was actually best), you will often see the show casually dismissed as falling off a cliff only after Michael Scott left.* In reality though, the final four seasons of the show got progressively worse, and the loss of Michael Scott was simply a moment that represented an especially steep decline in quality.

*In a real article, I would have to cite something here to prove that statement; this is the internet though so just trust that my anecdotal experience “feels true” and keep it moving.

Part of the reason though that those final four seasons were so frustrating was that the show was coming off such a beautiful and touching sequence of events. The final stretch of The Office season 5 was a perfect sendoff for this ridiculous community of characters.

The people we grew to love after five seasons were pushed into a corner for the very first time. The arrival of (Prince/Sir) Charles Minor late in season 5 resulted in Michael Scott leaving Dunder Mifflin and much discontent in the office. As it turned out, Michael Scott was accidentally the perfect manager for the Scranton branch of the company for a variety reasons, and his attempt to form his own paper company (with Pam & Ryan) put Dunder Mifflin in a bit of a pickle.

In the wake of Michael & co. returning to the fold, there was a tranquil feeling in the office after some initial tension. The penultimate episode of season 5, “Cafe Disco,” represented this blissful moment in time where everyone was fairly content with their place in life and in the office. While those moments in life never last forever, the show followed it up with a season finale that beautifully left our beloved characters in a moment of hopeful uncertainty. Every aspect of the finale was perfect and only would have been better if it was actually how we said goodbye to them all.

The Cold Open: Cold opens traditionally had been used on the show as a means of pitting Dwight and Jim against each other in some way. While many of them led to funny moments, there were certainly more than a fair share of gags that made the characters a bit too mean (particularly Jim).

This one was different. Yes, it involved a prank but this time we saw the office conspire to leave early as Michael had passed out during the day due to consuming “an entire, family-sized chicken pot pie.” Everyone is working together. It’s at Michael’s expense, but it’s not mean. When it all works out just as planned, there is this lovely moment where everyone celebrates a job well done. It wasn’t that all the old grudges had been forgotten; it was just a warm reminder that underneath all the hostility and absurdity were still a group of human beings at dead-end jobs that could all universally love the fact that they got to go home early one day. 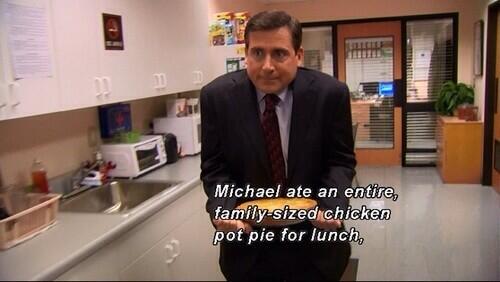 PB&J: Season 5 was a bit of an odd season for Pam & Jim. They were still in somewhat of a honeymoon stage of their relationship and that allowed them to survive what could have easily been a somewhat traumatic experience for Pam.

After years of flirting with the idea of exploring her art, Pam finally went to an NYC art school at the start of the season only to fail to complete all the required coursework. She had to decide whether to stay in New York to try again or return to her hometown and be with Jim. She opted to return home.

The show did not really ask us to question the significance of this decision much at the time. This was obviously though a really tough decision for Pam that clearly would have long-term ramifications even if she seemed perfectly content with her choice in the moment.

By the end of the season, Pam finally begins to question herself in a way. She does not express regret for returning to Scranton and Jim, but she does realize that life as a receptionist/secretary for a mid-range paper supply company is not enough for her, and she joins Michael in his exit from the company.

That decision ended up being successful in a roundabout way as it eventually ended with her becoming a salesperson with Dunder Mifflin and, thus, on what appears to be a more fulfilling track for the time being.

Jim and Pam’s future together then obviously took a major turn in the closing moments of the season 5 finale as it was revealed (in a very labored, pun not intended, fashion) that Pam was pregnant.

While Pam’s internal happiness and satisfaction with herself was still to be determined, it was obviously quite touching to see this young couple blissfully happy as they learned of their impending growth as a family. Their story in season 5 captured much of what being a young couple is all about: hope, confusion, ignorance, and joy.

Ending their story on such an uncertain note only made this more poignant as a potential conclusion. 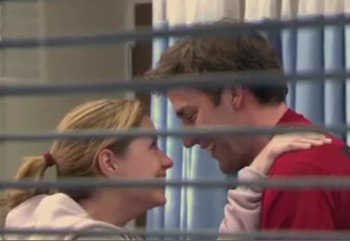 Dwight & Angela: The relationship between Dwight and Angela throughout seasons 2-3 did a great job of humanizing both characters, giving the actors completely new beats to play, and just generally made the two of them far more likable on screen.

Their breakup in season 4 always seemed slightly forced to a degree in that it came out of nowhere due to outside events (Dwight accidentally murdering her cat in a freezer in a misguided attempt to euthanize the already dying cat – you know, that old chestnut) as opposed to organic issues that all couples go through.

The show finally teased a repair here, as Dwight came to Angela’s defense when Dwight’s friend, Rolf (James Urbaniak), repeatedly slut-shamed her throughout the episode. The circumstances of this situation were a bit suspect, as Angela did not really have anything to apologize for beyond lying to Dwight when she said she was not sleeping with her fiancee (but even that…).

Thus, the dynamic of Dwight “showing mercy” on Angela was kind of crummy, but it nonetheless signaled that this couple with a deep connection would once again try to come back together. It was a very welcome and human moment.

Dwight & Jim: Not only do they get to conspire to leave work early in the cold open, Dwight and Jim also get a couple of moments during the volleyball tournament that they make for a wonderful tandem. They hug after they  work together to win a game. Then they conspire on a plan for how they can stall while Jim takes Pam to the hospital.

Season 5 proved that Dwight and Jim were far better (and funnier) frenemies than they were actual enemies. They would and should never have become best of friends or anything like that, but this was a wonderful conclusion to happy (if uneasy) alliance that these two had finally formed for real.

Michael: While all those things were fantastic to watch unfold, they all would have been meaningless if not for the major story of this episode: Michael Scott finally growing up.

Michael Scott was always the true focus of the show of course, and the transformation he underwent in the previous season peaked here. And that is why this episode was truly the perfect end to the show.

Michael goes into the company-wide picnic with the intention of telling Holly (Amy Ryan) that they are soup snakes soul mates and that they should be with each other. Unforeseen circumstances ended their budding romance early in season 5, and Holly started up a new committed relationship in the meantime.

The old Michael Scott would have made an ass of himself.

The old Michael Scott would have done something truly humiliating.

The old Michael Scott would have done something that would have embarrassed Holly in front of everyone.

The old Michael Scott would have caused the audience at home to watch the episode through their fingers because the secondhand embarrassment would have been way too strong.

This was not the old Michael Scott.

That gradual growth Michael went through allowed him to watch Holly be with her new boyfriend at the picnic and not do anything stupid.

Michael instead did something incredibly bold for him: he simply just concentrated on respecting Holly’s decisions and space which gave him room to grow closer to her. It gave him room to interact with her in a way that actually proved  yet again that their connection was special and that they actually probably were perfect for each other. They got to truly be themselves with each other in a manner that they could not with anyone else.

Did Michael Scott still hope to end up with Holly? Of course. And the hopeless romantic in Michael still 100% believed that they would definitely be together one day. But Michael had grown up enough finally that he would not try to force it to happen. Michael finally learned to be nice and respect someone enough to choose him (one day). There could not have been a better and more satisfying conclusion to the story of Michael Scott.

When it comes down to it, The Office would have been a better show overall if seasons 6-9 did not happen. That’s not to say those seasons were useless by any stretch. I’m certainly glad to have Mose the parking valet, Scott’s Tots, Creed being perfect, Ultra Feast, Michael trying to pronounce ‘capocollo,’ and many other moments.

But the show clearly lost the thread after season five on the whole. Characters that we loved became caricatures. Jim and Pam became nearly insufferable. The Michael/Holly reunion was botched and ignored all the growth Michael had made two seasons earlier.

More than that though, the show just lost the magic touch that made nearly every episode fun and satisfying as they sacrificed much of the show and characters’ credibility in the search for new avenues for humor.

If the show had ended at “Company Picnic,” the show would have gone out on top in every way. Not only was the show still a comedic force. This finale would have allowed all the crucial characters to have made substantive and genuine growth while also ending on the promise for something more.

And it’s not that the characters would have all definitely gotten the happy endings teased here. Michael and Holly were no guarantee to end up together. Pam would have had to confront the fact that she put her professional dreams on hiatus. Dwight and Angela certainly had their share of issues to work on if they ever would have wanted to try again.

But that’s what life really is. It’s not necessarily about getting a happily-ever-after ending. It’s about trying to better yourself and putting yourself in a situation to one day maybe get what you want. That was The Office at its peak: absolutely ridiculous yet somehow true to the spirit of life.