While we all know/remember the much-celebrated Spider-Man and X-Men animated shows, some other heroes also got a shot including Iron Man and The Incredible Hulk. These two in particular even got to do a crossover episode. Welcome to the fourth edition of Marvelous Animation!

1. Bruce has a very annoying friend

This guy is named “Rick,” and he is very boring and annoying. He is also for some reason at the center of this Hulk/Iron Man episode as he is the person that brings them together. He is very much a creature of 90s pop culture in terms of what the entertainment industry thought would interest people. He’s got a laid back slacker vibe, and it’s just very cringe for wont of a better word. I know it’s tough to tell Hulk stories with him at the center, but it’s why he’s always better suited to be paired with another protagonist. Preferably not random humans named Rick.

And he’s also kinda chill compared to the characterization Robert Downey Jr. brought to the character. While there are some limits to what RDJ did of course, this portrayal done in the 90s animated world certainly feels quite flat and shallow.

Tony Stark made a being that is both a computer and ghost that does his bidding. I feel like the movies really missed out on ghost computer Homer. Someone should do something about this. 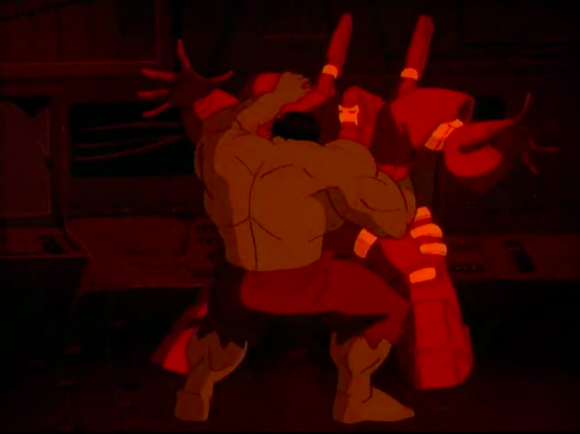 They probably could have milked this more, but there were only a few shots of them going at it, and the rest of the scene is comprised of the battle against General Ross and his robots. Perhaps if these two shows were more successful, they were hoping to do a sequel to this crossover?

5. Yea, War Machine is there too

Much in like most portrayals of War Machine, James Rhodes exists to do Tony’s bidding and to be an inferior version of Iron Man who keeps failing in order to showcase Tony being successful! It is an unfortunate dynamic!

Honestly, this one is pretty boring and not worthy checking out even with it only being twenty minutes. It does make clear why neither show took off though as neither character jumped off the screen and their surrounding ensembles also were found wanting.