Plot summary: It’s a race against time as Batman tries to figure out who poisoned Harvey Dent. Spoilers: It was his new girlfriend Poison Ivy.

This episode marks the franchise debut of Renee Montoya, the other original character the show created who has become a mainstay of Batman.

Paul Dini’s first writing credit on the show. He will go on to script many of the best episodes, as well as the Arkham Asylum video game, which saw Kevin Conroy and Mark Hamill reprise their voice roles.

The newspaper article with Bruce and Harvey at the prison was reused years later in the background of an episode of Young Justice. A neat nod to the past in a shared universe. 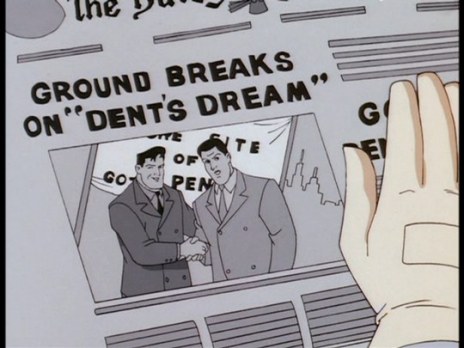 Five years ago, Bruce Wayne and Harvey Dent break ground on the future site of Stonegate Prison, intended to make Gotham a better, safer place. An unseen woman you’d have to be an idiot to not be able to guess the identity of seems none too pleased due to the number of wild flowers and weeds growing on the land. She ominously saves a newspaper clipping of Bruce and Harvey.

In the present a prisoner escapes and boards a helicopter, not banking on Batman giving chase. Bats brings the chopper down and battles the escapee on foot, declaring he is his worst nightmare. Metal. The GCPD arrive to re-arrest the unnamed criminal while Batman flees.

At the Rose Café, Harvey Dent and his sultry date, Pamela Isley, await Bruce Wayne. Harvey insists they order as Bruce is frequently late to engagements. There are a lot of “he still manages to get his kicks” and “there’s nothing we don’t know about each other” gags. It’s cute.

Bruce races home to swap his cape and cowl for the hideous brown suit he always wears, and trades the Batmobile for a car manufactured by a company that went out of business in 1937. Eat the rich.

The three have a good laugh, but Pam has to duck out early, though not before kissing Harvey for an uncomfortably long time. The producers rejected multiple attempts by the animators at making her walk away in sexy enough fashion before an in-house storyboard artist stepped in. Truly they did the Lord’s Work… if the Lord’s Work is spending far too much time and effort making a cartoon lady hot enough for its audience of children. I am 31 years old.

Harvey drops the bombshell that he’s asked Pam to marry him after only dating for a week, making comments about how love hit him “right in the face” the moment he saw her. He then passes out in his desert. Bruce finds this VERY funny but does eventually realise his best friend is unconscious and calls an ambulance. 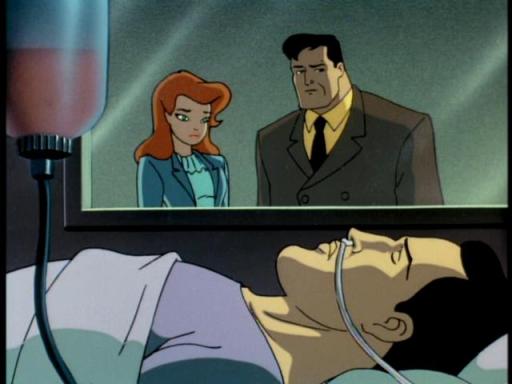 Harvey is rushed to Gotham General and falls into a coma. Upon learning Dent was poisoned, Jim Gordon orders a full investigation. Bruce, a better detective than any of the professionals, decides it might be a good idea to ask the doctor for more information before leaving the building.

The doctor casually states Harvey will die if they don’t find an antidote soon, and then leaves his blood work under the microscope and walks out, leaving a stranger alone in a medical lab. This seems like multiple breaches of protocol, but I guess these are the privileges afforded a billionaire. Eat the rich.

Speaking of eating, Harvey Bullock interrogates the poor pastry chef of the Rose Café, who shares his delicious recipe for chocolate mousse, and a busboy who has inexplicably been drawn as a stereotypical maître d’, right down to the pencil moustache. Seems unlikely he’d do both.

Batman analyses the blood sample, identifying the origin of the poison to an extinct genus of rose. The same rose our mysterious figure was seen cultivating on the site of the prison five years earlier…

Exasperated, Bruce can do nothing but look on impotently in the hospital. Pamela attempts to visit, but is turned away because visiting hours are over. Bruce walks her to her car and promises to call if anything changes, but her embrace plants a seed… of an idea in his head.

Running a background check on his friend’s fiancée, Bruce learns Isley is a biochemist who helps develop perfumes, as well as giving lectures about extinct plants. Racing to Pam’s enormous greenhouse workplace, Batman observes her cultivating the plant in question.

Stopping just short of watching her undress, Bats infiltrates the greenhouse and almost immediately falls into a pit of aggressively spikey succulents. It’s out of the frying pan and into the comically yonic (google it) Venus Fly Trap, though. 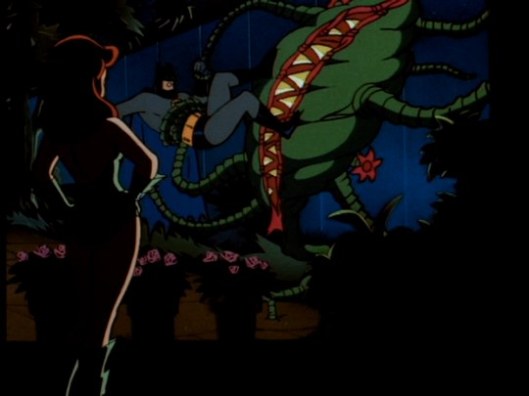 Bruce Timm stated they originally designed this plant to resemble Audrey from Little Shop of Horrors, but he opted to re-draw it, and despite quickly realising it looked like a giant vagina, opted to go with it because metaphors and whatnot.

Having changed into her Poison Ivy costume for unknown reasons, Isley mocks Batman’s predicament and laughs at Harvey’s condition, revealing she holds a grudge against him for bulldozing the land and killing all the plants. She applies some of her poisonous lipstick and plants one on Batman, who is still struggling to fight off an enormous symbol of womanhood. 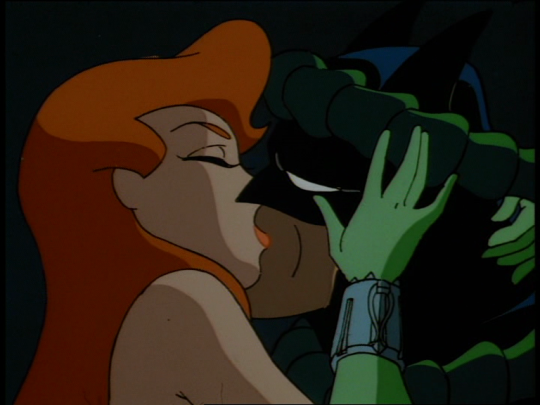 Ivy taunts Batman with the antidote (nice touch to have her apply it herself as she’s just coated her mouth in poison), but he’s able to cut his way free using a hidden blade. Ivy is furious he harmed the plant and shoots at him with a badass miniature wrist-mounted crossbow.

Things get really out of hand and he accidentally brings down some of the roof lights, starting an electrical fire that burns the whole greenhouse down. Ivy has Bruce dead to rights, but he was able to snatch the last of the extinct roses and trades them for the antidote.

Harvey wakes up and Bruce not at all gently breaks it to him that Pam is now locked up in the very person that started all this mess. Ivy vows revenge, nurturing the roses menacingly.

I wouldn’t say anyone massively stood out here. Everyone was good, right down to Robert Costanzo as Harvey Bullock being too heavy handed with the restaurant staff.

But I’ll go with Diane Pershing for her femme fatale style Poison Ivy. She sells the vapid sexpot façade effectively without it being unbelievable that she has a PhD and almost gets the better of Batman.

I’m a fan of her faux concern for Harvey to mock Batman, and she manages to do the hysterical screams without it seeming overtly sexist too. The ‘I’ll have my revenge’ closer is a bit overkill, but what are you gonna do?

The bar was set very low last time, and this episode easily clears that. The best episodes generally involve some kind of mystery for Bruce to solve, with a culprit hiding in plain sight. Ya know, like Scooby Doo. It’s also a great touch to feature Harvey prominently and establish him as Bruce’s close friend given what’s coming in a few episodes. In particular I dug the back and forth editing between Harvey talking about Bruce to Ivy, and Batman doing his thing on the rooftops.

If there were more time I’d like to have spent longer in the flashback scene, as it’s generally fun to play around with the past, but I understand that it’s a 23-minute episode with a whodunit plot to untangle. Still, I really like the sardonic touch of “A Better, Safe Gotham – 5 Years Later” when they move forwards in time after what Harvey promised, immediately followed by somebody escaping the prison.

I don’t want to go overboard with praise, as I see this as more of an upper-middle-tier episode. I could go either way on if it’s better or worse than ‘Christmas with the Joker’, but it’s definitely not ahead of the pilot. While Mark Hamill’s range stands out, I give the twisty-turny nature of this one the slight edge.

Ivy is the type of character who can be fertile ground for nuanced shades of grey morality or massively over-sexualised. I know some people are fans of Uma Thurman’s live action portrayal of the character, but I think this animated rendition is much better.

She has a solid motivation, executes her revenge plot, and has fun doing it, getting to flaunt her guilt in the faces of the mostly ignorant men. She would have gotten away with it if Batman weren’t so suspicious of sex, and also ruthless enough to bargain a near-extinct plant for the antidote. Women, undone by having a shred of empathy as per usual.

Joker can’t really be topped (read that how you will), but she’s streets ahead of Scarecrow, and potentially the single most underrated Batman villain, given she frequently operates from a place of objectie moral truth. I have some memories of her being reduced to a mwahaha supervillain in later episodes, which may knock her down the list, but we shall see.

Speaking of my podcasts, There Will Be Movies has just reviewed one of the finest films of the decade, The Social Network.