The Movie: All The President’s Men

One Sentence Plot Summary: Bob Woodward and Carl Bernstein help bring down a corrupt presidential administration, and it all feels like a fantasy now.

Why It’s on the List: For any wanna-be journalist, you saw this in a class whether it was high school or college. This is the definitive movie about journalism. Even though I have three other movies about people in this field, this is the clear number one. You see the excruciating process. Woodward and Bernstein get it wrong. They go into the wrong house or write an inaccurate story. What Alan J. Pakula gets so right is this struggle but he glamorizes it. Every time the camera goes wide to show how big things are for the main characters, they’re hero shots.

The closest to an action scene is when Woodward thinks he’s being followed after a meeting with Deep Throat. This is all about the process of journalism, and I cannot imagine a movie being made in this way ever again. Even a film like Spotlight (more on this later) has a bit more panache and some bigger acting moments.

I also love how different Woodward and Bernstein are. The former is a bit straightforward, milquetoast on the surface. Bernstein has a bit more griminess to him, and he’s willing to go a bit farther to get the story. A great little moment I noticed on the latest rewatch is when Woodward mentions being a Republican, and Bernstein gives him a perplexed look (in 2020, that would warrant a punch in the face).

Dustin Hoffman and Robert Redford only did this one movie together, but they are almost as linked in my mind as Woodward and Bernstein. Jason Robards is also stellar as Ben Bradlee. Jack Warden and Hal Holbrook come off the bench and fill in some of the edges.

This is a movie I first watched when I was 13 and saw in both a high school and college journalism class. It transfixes me every single time because of the acting, the score, and the how meticulous the film is with all of the reveals. 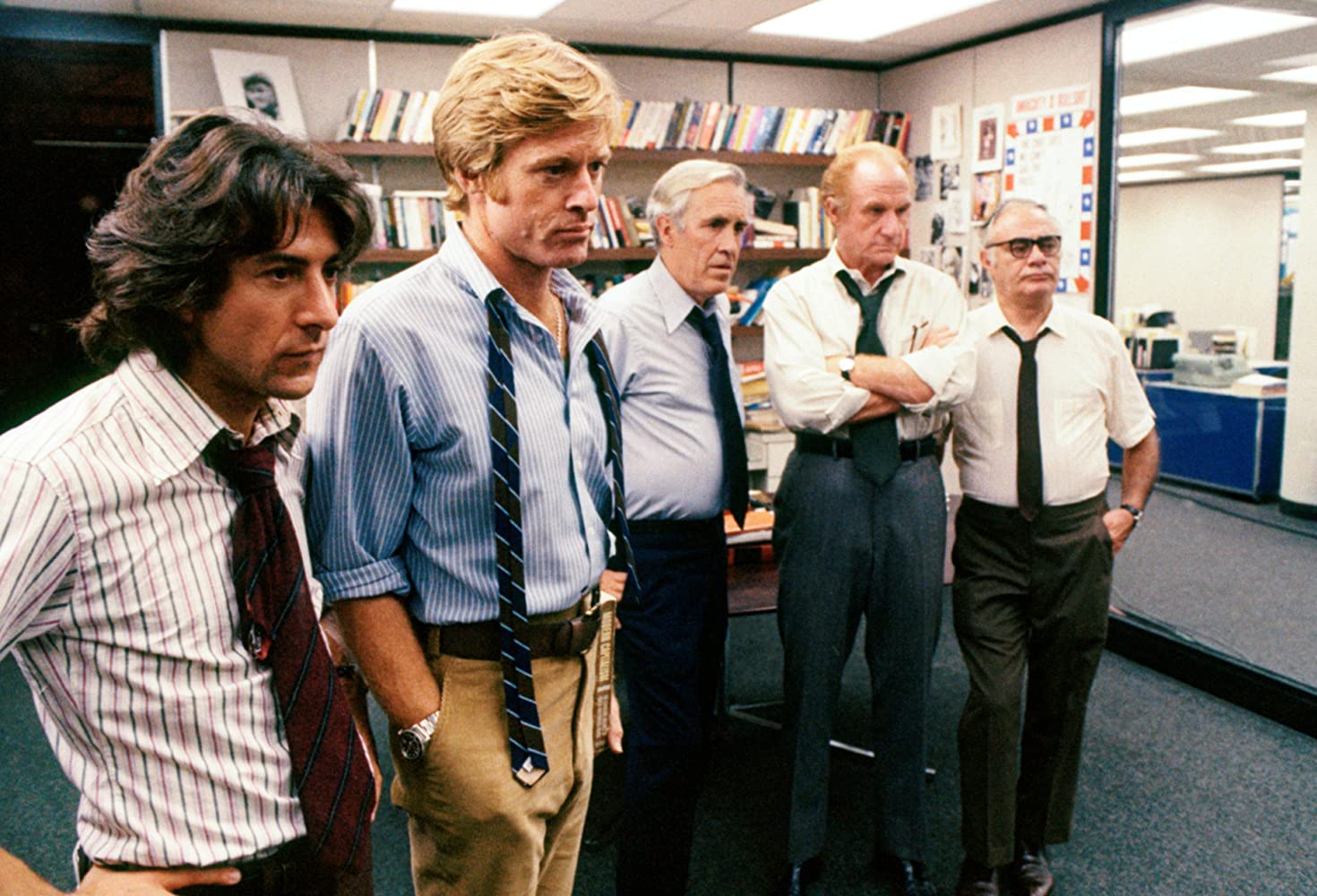 *Carl Bernstein smokes everywhere, and it’s really gross. Even Woodward comments on it when they’re in the elevator.

*Dustin Hoffman – look it up.

*The question Sally (a reporter no less) gets asked by Woodward about sleeping with someone was gross.

MVP: This is another case where actors from this movie can be MVPs and still not give the best performance. I almost wanted to give the award to Alan J. Pakula because he somehow was able to make a movie all about talking (in-person, on the phone) interesting. However, I think Robert Redford and Dustin Hoffman are so closely associated with this film that it’s almost impossible not to see them as one entity. They are playing two very different journalists, but they play off each other so well. They even create a dog and pony show when talking to certain possible sources. I love their dynamic, and even though there isn’t a love story, they’re one of cinema’s best couples.

Best Performance: I love Jason Robards so much in this movie as Ben Bradlee. I referred to this as a bit of an underdog sports earlier. Bradlee is the scraggly football coach who at certain times is a complete asshole but also motivates them when they need it. He’s become so intertwined with Bradlee in my mind that I actually picture Robards first. In reality, they’re voice twins. Although Redford and Bernstein are the MVPs, Robards’s performance is stellar in limited screen time.

Seriously, I know things are crazy right now, but there is a prominent person in American history named DEEP THROAT.

Is there a sequel?  There is a sequel book that covers Nixon’s resignation and some of the fallout but no film….but there will be.