Plot summary: Harvey Bullock and Renee Montoya clash over who is to blame for a sting operation gone awry. There are three sides to the story, but who is telling the truth?

The initial version of the script was said to be more complex, with flashbacks to the youth of Renee and Harvey. Business standards and practices had a field day with it, cutting around 9 minutes of content that required the addition of an extra action scene at the end to pad for time.

First episode without an unmasked Batman. In fact, Batman doesn’t even speak until near the end, and only has five lines when he does.

Don’t let ANYONE tell you the plot of this episode follows that of Rashomon.

Renee Montoya and her partner, Wilkes, race to a sting operation, clearly misunderstanding the meaning of stealth, as they have their sirens blaring. They arrive at the expected rendezvous only to find the building on fire and Harvey Bullock shaken up nearby. Montoya heads inside while Wilkes gives chase to two escaping crooks. Harvey woozily looks to the roof and sees the silhouette of Batman.

We move ahead to the trio being dressed down by Hackle, presumably an internal affairs agent, who blames them for ruining their months-long operation, suggesting they may be taking bribes from the mob. Jim Gordon objects, while Harvey suggests Batman is to blame. Wilkes mentions also seeing Batman but is ignored.

Hackle invites Bullock to tell his side of the story. Harvey’s narration states he saw Batman enter the building so he entered the warehouse out of fear of the vigilante ruining the mission, but what we see doesn’t reflect this, as Harvey enters BEFORE the familiar silhouette of Batman appears behind him. (This is why the plot doesn’t follow Rashomon – Harvey’s testimony is shown to be false even as he tells it, albeit only to the viewer.)

Harvey trips on a metal can, alerting the criminals to his presence, though he claims to Hackle the noise came from out of nowhere, suggesting it was Batman. Bullock fights the goons off and in the ensuing chaos the warehouse catches fire. They cleverly get away with more violence than usual by depicting Harvey’s brawl via shadows on the wall. Batman swoops in and gets Harvey to safety, though Bullock of course claims it was the other way around. 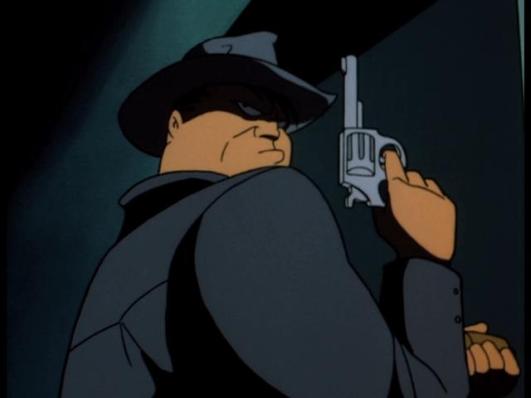 Hackle is dismissive of Harvey’s story, demanding to know the real reason he went inside without his backup, but Bullock deflects, so Wilkes tells his story next. He gave chase to the escapees per Montoya’s orders but ended up fleeing for his life from their getaway vehicle.

Batman suddenly appears and tosses caltrops to burst the car’s tyres and then takes down the driver with a batarang. Wilkes tells all of this in a far more supernatural manner, of course.

Wilkes finishes his story by saying the crook said something that sounded like “Doc” when Batman grabbed him, but Hackle feels Wilkes is leaving something out. Montoya defends him and then gives her perspective of the events.

Entering the warehouse, Montoya overhears the name “Hathcock” from the mobsters still inside. They set upon her but Batman comes to her rescue, easily taking them all down despite Harvey’s claims about needing rescue earlier.

Montoya attempts to make arrests, but the ceiling collapses and Batman shoves her aside, seemingly perishing. 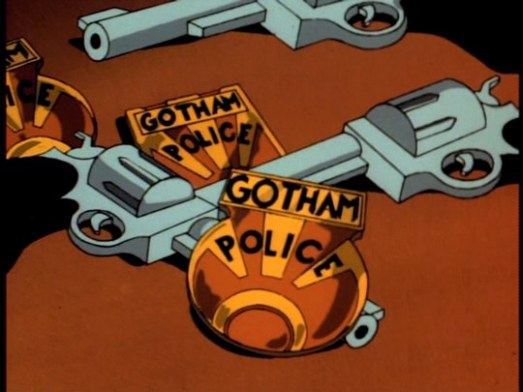 Having heard all three stories, Hackle suspends them in lieu of a final verdict!

Montoya later realises “Doc” was actually dock, and heads to the Hathcock Shipping Company warehouse, where she finds Batman tied up. Batman frees himself and he and Montoya take the thugs down together.

There are tommy guns, giant crates and forklifts. It’s a decent enough little action set piece. Montoya ends up grabbing the group’s boss with a crane, earning her a hearty thumbs up.

Gordon commends Montoya for her work and tells Hackle to go spit, physically taking the three suspended cops’ badges back in what is surely a massive breach of protocol. Bullock thanks Montoya, initially begrudgingly and then more sincerely.

Not having Kevin Conroy to fall back on for the first time feels strange. I love Renee Montoya in the comics, but Ingrid Oliu’s performance is a little wooden in this episode. Bob Hastings’ Jim Gordon is excellent throughout the series, but he’s a minor player here.

I’m going to give this one to Robert Costanzo for Harvey Bullock. It’s a distinct voice and a memorable character, with this episode giving him a spotlight for the first time. While his role is primarily to be the cop who doesn’t trust Batman, the little moment of thanks towards Montoya at the end offers a glimpse of a more likeable version.

For an episode so light on Batman this actually works surprisingly well. There are interesting GCPD stories that can be told (please read Gotham Central if you haven’t), and shifting Batman from his central role to one that normal people are reacting to is almost always fascinating, playing into the idea he’s more of a symbol than a man.

Part of me wishes they HAD gone the Rashomon route and made all three flashbacks reflect their narration, particularly Wilkes’, as he describes Batman in a supernatural fashion. For instance, the Gotham Knight animated film features a group of kids swapping stories about times they saw Batman, with each tale done by a different animation studio and presenting the hero in a variety of hyper-stylised ways, including a monster and a robot.

But it’s also cute to hear Wilkes’ sensational words juxtaposed with Batman’s mundane actions. And in fairness, Harvey’s section being drawn to match his voiceover would likely be a little confusing for the target audience of small children. I am 31 years old.

I lament the loss of those extra 9 minutes, which could have fleshed Harvey and Montoya out more, but as filler action scenes go, that dock brawl is pretty good.

While this episode isn’t a banger, it certainly has a structural hook more sophisticated than most cartoons were trying at the time. If episodes without one of the rogues gallery disinterest you then you’ll likely be outraged by me giving it the edge over ‘Christmas with the Joker’, but hey, feel free to go make your own list.

No major villains this episode as it’s just a routine mob plot, though Ron Perlman does voice a character called Driller who… has a huge drill. He doesn’t really do much, but if I were ranking him I’d probably put him ahead of Sewer King.

There’s also a dude credited Scarface… who has a big scar on his face. Not to be confused with the long-time Batman villain of the same name who will appear later in the series. Even so, if I were ranking him I’d probably put him ahead of Sewer King.

Finally they have an unidentified boss (The Boss) who remains in the shadows until he’s caught. If I were ranking him I’d probably put him ahead of Sewer King.

Speaking of my podcasts, There Will Be Movies rolls on with a review of Black Swan.