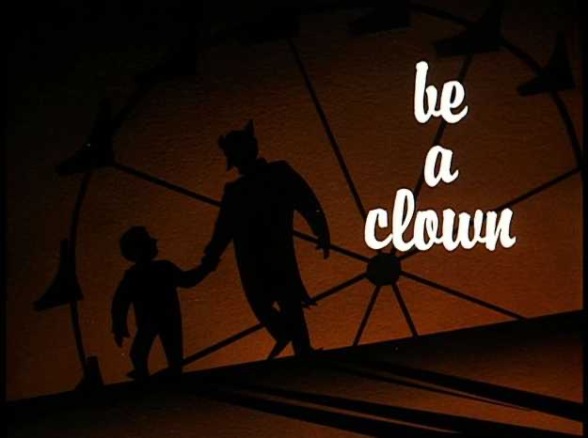 Plot summary: The Joker accidentally kidnaps the Mayor’s son during his birthday party, but tries to make the best of it by declaring the boy his protégé.

Episode Title: ‘Be a Clown’

Bruce Timm storyboarded the second act after a freelancer quit for unknown reasons.

‘The Great Prosciutto’ is of course a caricature of Alan Moore, writer of The Killing Joke, Watchmen etc.

Joker was originally scripted to deliberately abduct Jordan. He was also supposed to spray acid from his lapel, but the censors made them change it to gas. I’m not convinced that’s less violent.

The robotic clown who scares Jordan near the end is voiced by Tim Curry, recycling the laugh he recorded before being replaced with Mark Hamill. 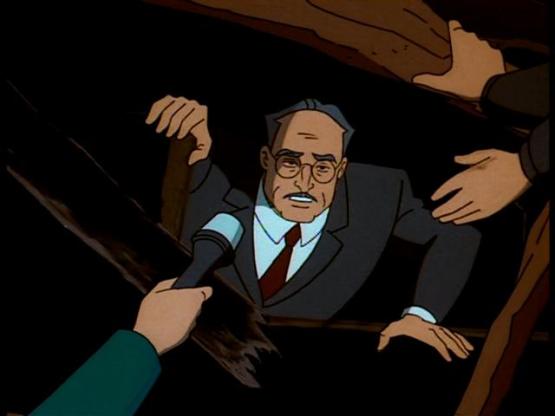 Mayor Hamilton Hill gives a press conference following the completion of Gotham Towers. Not understanding the concept of tempting fate, Hill declares how safe Gotham is… just as a police chase comes screaming through the lot, leading to a shootout.

Batman swoops in to resolve the situation and deliver a one-liner about garbage collection, before fleeing the scene. Summer Gleeson (remember her?) sardonically asks the Mayor how safe the city is because she loves drama. Hill doubles down on his position, stating it’s just a few “bad apples” including Batman and the Joker, who he vows to run out of town.

Outraged to be compared to his nemesis, Joker takes a comment about how safe Hill’s home is as a challenge…

The Mayor makes sure everything is in order for his son’s birthday party, which he is using as an excuse for a political event, naturally. Sure enough, Jordan knows none of the guests (including Bruce Wayne) and has a miserable time (including being told the magic tricks he’s practicing are silly)… until a hired party clown arrives to liven things up. 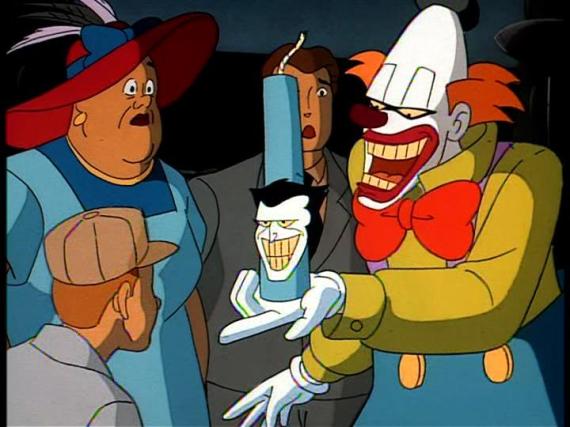 Planting a giant candle that is in no way suspicious atop the birthday cake, ‘Jekko’ leaves in a hurry, but Bruce recognises his laugh and ‘accidentally’ knocks the cake into the pool just before it explodes. Commissioner Gordon brings in “the real Jekko the Clown” who declares that somebody stole his truck and costume. You’ll never guess who…

Yes, The Joker drives back to his abandoned amusement park hideout, blissfully unaware that little Jordan Hill has stowed away in the back. When the boy reveals himself, the Clown Prince is initially furious, but sees an opportunity to train a protégé.

Hamilton laments his mistreatment of his son (Bruce noticed he was missing before he did), vowing things will be different if he gets him back. To that end, Bruce notices Joker’s poster of ‘The Great Prosciutto’ and heads to the amusement park, which is plastered in similar posters. His encyclopaedic knowledge of long-closed Gotham businesses is ridiculous but extremely on brand.

Dropping his sword swallowing lessons after spotting Batman on the security system, Joker drafts Jordan into acting as a distraction. The Caped Crusader evades a barrage of razor-tipped playing cards but falls victim to knockout gas.

Batman awakens in a straitjacket inside a water tank a la Houdini, and despite making a valiant effort to escape finds it firmly locked. Jordan realises how wrong all of this is and attempts to free the hero, but Joker chases him off, leaving Bats to try and break the glass, which he does eventually manage.

Joker stalks the boy through the grounds with Batman in pursuit, leading to a rollercoaster race complete with exploding doll projectiles that Joker continually produces from thin air.

Batman leaps over to Joker and Jordan’s car after his is blown up and the two wrestle. Avoiding some poison gas, Bats kicks Joker over the edge and into the water below. 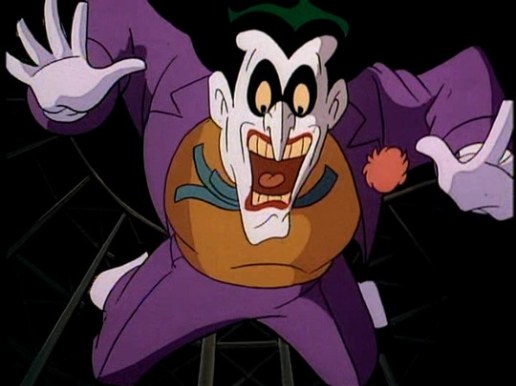 Jordan isn’t safe yet though, as Joker had blown a hole in the track further ahead, and while Batman implores him to take his hand, the boy is too frightened of his would-be rescuer. Coming to his senses at the last moment, Jordan accepts and the pair leap to safety as the park collapses, and then asks if they can go home.

True to his word, Hamilton is thrilled to be reunited with his son, apologising for hijacking his party and giving him a big hug while Batman… watches on from the bushes. WTF?! 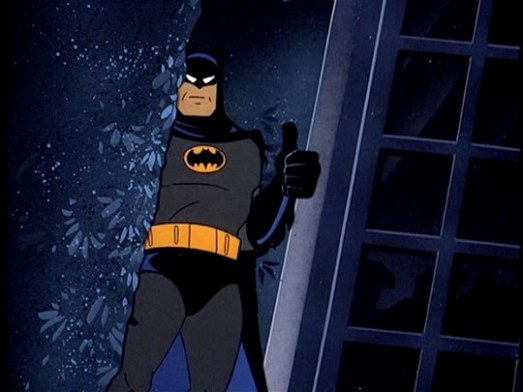 This was another strong outing for Mark Hamill, who performed multiple roles, something that always wins you bonus points in my estimation. Not only was he back on top form as Joker – once again running the gamut from whimsical to psychotic – he also got to have some fun as the hammy ‘Jekko the Clown’. Rounding out his work for the episode, he performed the disgruntled manservant of Hamilton Hill, Franklin.

Lloyd Bochner’s Mayor Hill voice is pretty good too, but it’s got to be Hamill.

Praise be a simple Batman vs. Joker episode. It wasn’t even the best one of those, as I’d put it below ‘Christmas with the Joker’, but after so many up and down episodes, it’s nice to get back to basics. There were some great ideas throughout, from bringing Mayor Hill to the forefront after his smaller previous appearances, to demonstrating how personally Joker can take things, to Bruce having to think on his feet to save people without dropping his bumbling billionaire façade.

But the best idea, in fact the one that led to the story being written in the first place, was the one they did the least with: Batman terrifying the children he is trying to save. Jordan was moments away from death because it seemed a better option than taking the hand of this big masked weirdo, and that’s after he spent the day with the most famous villain in comic book history.

It’s an idea that has been done elsewhere and I’d like to have seen it explored more here. For instance, in my favourite book ever, Justice League: The New Frontier, Batman is so mortified that he scared a child that he changes his costume and recruits Robin to try and rehabilitate his image. Robin has of course already debuted by this point in the series, but you get the idea.

Anyway, a fun, if middling episode that’s likely going to get pushed further down the list in the near future as we reach some of the highest rated work in the show.

For as much as I complained about Joker appearing in 2 of the first 4 episodes, it was nice to have him back given what we’ve been subjected to lately. It’s also a massive improvement on his outing in ‘The Last Laugh’. He completely flipped out over an innocuous comment, nearly killing dozens of party guests because the Mayor dared to compare him to Batman. This is great stuff for a character intended to be unhinged and unpredictable, and we’ll see how much of a grudge he can hold in a future episode.

He also gets to oscillate between theatrical hijinks – posing as an over the top party clown and trying to teach Jordan some magic tricks – and genuine menace, as he goes into full slasher movie mode, following the boy through the abandoned amusement park, rattling his cane against some railings. I think Joker is at his best when he gets to do both, rather than engaging purely in outright menace, as there are plenty of other villains that do that, but not many who can pull off his level of chicanery.

Also props for having the world’s most famous clown disguise himself as a slightly different clown. Sincerely. That’s good stuff! 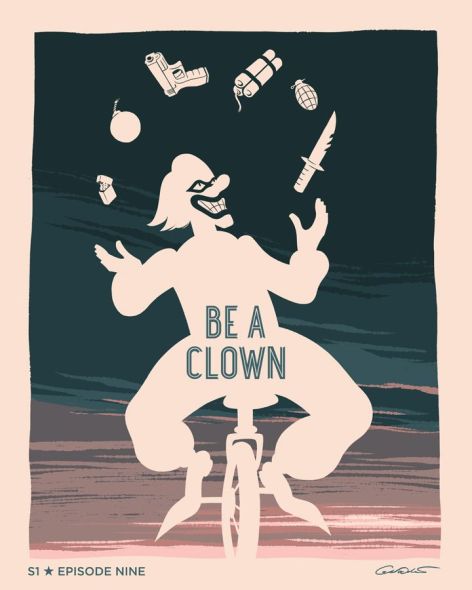 Speaking of my podcasts, There Will Be Movies has just covered Drive.

Jerome & Brian’s Pantheon Plus is moving on from fantasy and sci-fi to comedy with Beverly Hills Cop this Tuesday.