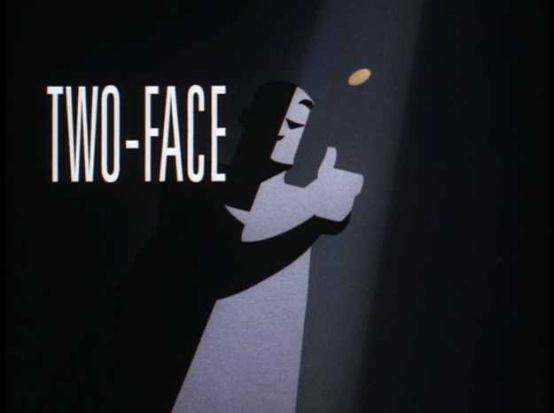 Plot summary: Harvey Dent agrees to see a therapist after his anger management issues threaten to cost him his job. But as his multiple personality disorder comes to the fore, things take a tragic turn.

Al Pacino was offered the role of Two-Face in an incredibly optimistic move, but he of course turned it down.

The producers consider this the episode where the show finally became The Show. Agreed.

To that end, Kevin Altieri admitted to frequently tinkering with scripts he directed, but said he didn’t have to do very much with this one at all. 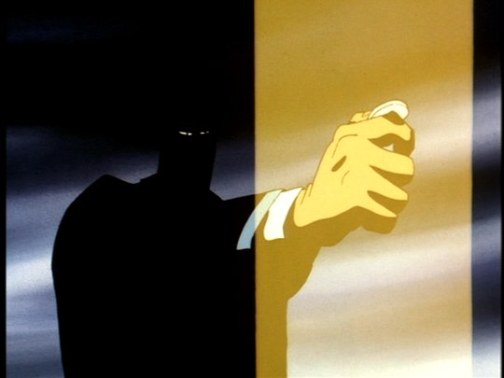 Harvey Dent awakes from a nightmare in a cold sweat, unable to shake a menacing voice and a shadowy figure constantly flipping a coin. His colleague at the District Attorney’s office alerts him that Jim Gordon has started a raid and he needs to attend.

Predictably, Batman shows up, taking down the crooks one at a time before the police can even step foot inside the building. Harvey gives a triumphant speech to the press, but when one of the criminals kicks mud at him he flies off the handle, with the GCPD having to restrain him. Jim Gordon snaps him out of it and he slinks away embarrassed.

Mob boss Rupert Thorne watches the ensuing news report, feeling the stunt will in fact boost Dent’s popularity for some reason. Still, he’s intrigued, and orders a woman in his employ named Candice to try and uncover some dirt on the DA.

Later at a re-election campaign fundraiser bankrolled by Bruce Wayne, Harvey continues to speak on his efforts to clean up the city. His fiancée and Bruce make jokes about when he’s going to marry her, with Wayne reminding the audience that he and Harvey are extremely close.

Learning that the criminals from the raid are going to walk because of an improperly filed warrant, Harvey snaps again, assaulting his colleague and nearly punching Bruce before Grace steps between them. Candice smirks.

Bruce and Grace implore Harvey to seek psychiatric help as he was “like a different person”. Harvey is dubious, feeling that it would harm his election chances if word got out he was in therapy. It’s wild that this line still plays 30 years later despite us talking more openly about mental health. Harvey reluctantly agrees.

At his first session, Harvey is hypnotised by a therapist, who encourages his alter-ego, “Big Bad Harv”, to speak to her. Sure enough, Harvey’s voice and expression change, and he begins compulsively flipping a coin.

The therapist tries to help, but “Harv” starts smashing the office up and nearly assaults her, but she clicks her fingers to snap him out of it. Oblivious but mortified by what he’s done, Harvey begs for an alternative solution to being committed to a psyche ward, agreeing to further therapy. Unfortunately, Candice is listening at the door.

Harvey learns he’s going to win the election in a landslide, thanking Bruce for his help and promising to announce a wedding date as part of his acceptance speech. Rupert Thorne telephones, threatening to leak what he knows to the press unless he get in a car waiting outside. Making excuses, Harvey leaves, despite Bruce begging him to tell him what’s wrong.

Batman manages to place a tracker on the vehicle, following it to a factory where Thorne and his men are mocking Harvey over his therapy confessions, the most crucial one being that he has repressed his anger since childhood due to guilt over punching a boy with appendicitis, sending him to the hospital.

Thorne attempts to extort favours in exchange for his silence. Harvey is livid, imagining the coin flipping through the air in his mind, with Big Bad Harv taking over and assaulting them. Batman tries to intervene, but the numbers disadvantage is overwhelming, and he gets separated from Dent.

Chasing Thorne across a gantry, Harvey falls victim to a (pretty well-animated) chemical explosion. Batman rushes over to his fallen friend and is devastated by what he sees, though we the audience don’t get to just yet.

In the hospital, the doctors assure Grace and Bruce that plastic surgeons should be able to fix Harvey’s heavily bandaged face, though Bruce wonders about the effect the incident will have on his psyche.

Sure enough, when the bandages later come off, the doctor is horrified by Harvey’s appearance. Demanding a mirror (in an obvious homage to Batman ’89), Dent looks upon his twisted façade and screams, stumbling out into the hallway just as Grace is on her way to visit. Catching sight of her fiancé, she faints, with Two-Face saying goodbye to her and fleeing through a nearby window.

Richard Moll with two bullets. He’s already shown impressive range throughout the series, from the night watchman in the pilot to the Thomas Wayne hallucination in ‘Nothing to Fear’, and has also provided the droll voice of the Bat Computer multiple times, but this is a whole other level.

His Big Bad Harv/Two-Face voice should be what you hear in your head whenever you see a picture of the character regardless of how good Aaron Eckhart was in The Dark Knight. It’s so immediately chilling, and most importantly sounds like a completely different person to Harvey.

He’s also putting in excellent work as Dent, slowly cracking under the stress of his job, his repressed anger threatening to boil over. The transition from Harvey to ‘Big Bad Harv’ and ultimately to Two-Face is a gradual one, with Harv getting closer to the end-point each time he emerges, but still not being all the way there until he catches sight of his own reflection. Truly exemplary work.

In fact it’s so good, I almost forgot to mention John ‘Animal House’ Vernon who is a pitch-perfect casting as Rupert Thorne and could easily take this category in the future.

I’m putting this straight to the top of the list. This show has a beloved legacy, but many of the earlier episodes didn’t exactly live up to it, to the point one would be forgiven for wondering if it’s all rose-tinted glasses. But this was a total home run.

It’s a villain showcase, as many of the best episodes are, and one that made good on the continuity established in previous weeks. It was also visually interesting, playing with shadows, lighting and the art of denying the audience a full picture, best demonstrated when Harvey looks into the mirror at the end, as we only see the lower half of his face before the camera cuts away.

More than that though, it’s another example of Batman operating as a third party for others to react to rather than as the central focus. I particularly liked the police raid, where you only caught glimpses of him doing what he does, including looking through the window from the police’s obfuscated point of view. A punch here, a grab there, that kind of thing. This pairs nicely with the slow reveal of Two-Face.

The thunderstorms are a little cliché, but clichés generally work for a reason, and let’s never forget that this is a children’s cartoon that’s delving into multiple personality disorder and repressed rage. Bruce Timm posited that children probably wouldn’t like this episode due to how much talking there is vs how little Batman, but I carried strong memories of this one into adulthood, so what does he know? 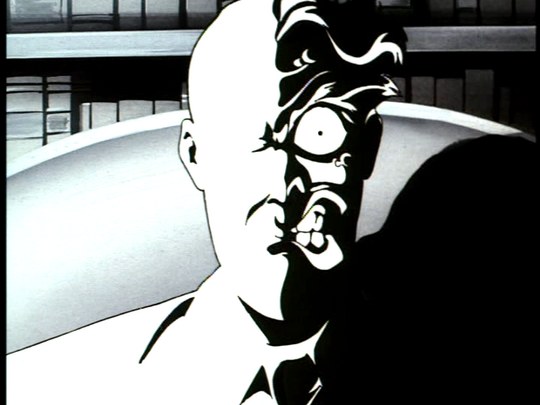 That Two-Face doesn’t get top honours speaks volumes to how good The Joker is, because this is a stellar character treatment. Putting in the effort to establish Harvey before his turn, even if it’s only a brief cameo and a single feature episode pays off, because there is a level of emotional investment and sympathy for him that makes the turn sting all the more.

I believe this was the first time that Harvey had been depicted as suffering from multiple personality disorder BEFORE his face was burned, and it’s masterfully executed. His accident acts as a catalyst, not a point of origin, exasperating his underlying problems and (in his own eyes) driving away the calming force of his fiancé.

That final moment revealing his frightening new visage is some fantastic monster movie stuff. But even before that, the subtle touches like his expression and posture changing when Big Bad Harv takes over are uncanny attention to detail. I’m not sure how I feel about his eventual look flashing on screen for a moment during a lightning strike. Cute? Hammy? You decide!

Finally, the touch of having mental health issues being a taboo topic for somebody in his position is a timeless chef kiss.

While generic mobsters aren’t as exciting as the costumed supervillains Batman is known for, there are some notable exceptions, and Thorne is definitely one of them. Carmine Falcone and Sal Maroni left Thorne in the dust this century after they were on vaguely equal footing decades ago, and his role in the show is essentially a blend of the three, but it’s certainly an enjoyable treatment, thanks in no small part to John Vernon.

He can and will provide adequate cover when the big guns are absent without deflating an episode, and thus slots in quite nicely just below the heavy hitters. To have him as a secondary presence in this episode is to be truly spoiled.

Speaking of my podcasts, There Will Be Movies rolls on with a review of Moneyball coming tomorrow.

Jerome & Brian’s Pantheon Plus has moved on from fantasy and sci-fi to comedy with Beverly Hills Cop, this Tuesday.