Writing those numbers down still feels insane to me despite planning this post for weeks. But they’re accurate and against all odds, we made it to two hundred.

Mike Thomas and I had been kicking around ideas about podcast series such as ‘Big Spideas‘ and something dedicated to X-Men: The Animated Series on-and-off for years. I was 100% convinced these pitches would lead precisely nowhere. After all, I’d only ever spoken to him out loud once (and on a multi-person podcast no less).

And yet, in June 2016 we converged and awkwardly recorded our first couple of episodes of Mike & Matt’s X-Cellent Adventures. How awkward? I started to refer to him by his longstanding twitter pseudonym during the intro before stopping myself to ask if I should instead use his real name. Needless to say we started that introduction over.

Our X-Men podcast was conceived to be precisely that and nothing more; a handful of episodes covering all of the X-Men movies released up to that point. We’d post the episodes on his film review blog and maybe a half dozen or so people would listen. Maybe. I had a logo hastily made to fulfil iTunes’ cover art requirements, giving no thought to colour schemes and brand synergy. Why would I? This was just a dumb thing we were doing to entertain ourselves for the summer. A great deal more thought has been put into our logos since then, including a significant upgrade of the original:

I would like to take this opportunity to thank Mike for the timing of that original podcast series; I had recently made the potentially dumb decision to walk away from my job of six years and move back to my hometown with nothing else lined up. It was a bleak few months of playing the ‘Thank you for your application. We regret to inform you…’ game, and in all seriousness this stupid podcast gave me something to focus on, even if I knew I was investing my time and money into something that nobody would listen to.

But here we are, a little over 3 years later and the episode count on our feed has hit the preposterous number of two hundred. Obviously we’ve had a little help along the way to boost those numbers.

In late 2017 our old pal Kevin Ford approached us about hosting he and Ben Lundy’s upcoming LOST podcast, From Broadcast Depth. After burning through X-Men, Batman, Firefly, Spider-Man and Blade, Mike and I had been struggling to come up with a new ongoing podcast series, so welcomed both the influx of new voices on the site and something to take the pressure off us to keep coming out with new content.

And FBCD did exactly that, publishing 63 episodes (plus bonus content) running all the way until March 2019, by which point we had also welcomed aboard Jerome Cusson and Brian DaBrain’s The Superhero Pantheon, which endeavours to review every single superhero movie. Ever. All of them. 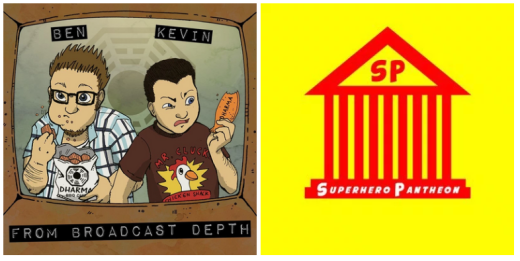 A huge thank you to both of these shows, which make up just under half of our episode count. We quite literally wouldn’t be at this point without you, and we look forward to Kevin & Ben’s next show, whatever it may be, as well as many, many more episodes of the Pantheon.

Speaking of superhero movies (and people called Ben), I would be remiss in not thanking Ben Phillips, first in his role as one of our earliest listeners and providers of feedback, and then for joining the site himself, even if we did flounder in an attempt to nail down an ongoing series (we will almost certainly never return to Pitch Please).

But luckily there had been a gaping MCU-shaped hole in our podcasting portfolio up to that point, with comments on our YouTube channel dating all the way back to some of our earliest X-Men episodes asking if we would be covering the Marvel Cinematic Universe. A huge thank you to Mike for declining to participate himself, and giving me full blessing to launch the series without him, namely Ben & Matt’s Marvellous Journey.

Ben and I would go on to launch Countdown to Destruction? a podcast dedicated to The Leftovers, Ben’s second favourite show of all time (LOST was taken), and we have recently launched There Will Be Movies, our attempt at a Big Boy Podcast discussing films that generally do not feature capes and masks.

Volume 1 will run all the way though the end of the year and we have a certifiably insane GoogleDoc that sketches out another few years’ worth of episodes, so fingers crossed that Mike doesn’t decide to shut this whole site down before then, eh?

But let’s get back to Mike. No matter how many other projects this site hosts, the core of the podcasting wing will always be our transatlantic shenanigans, and I think we have come an awfully long way in these three years. From our chemistry to our presentation, the improvements are evident in our most recent series The Sky Scorchers – A Matrix Podcast and The Wheelbreakers – A Game of Thrones Podcast. I’ve also gotten a LOT better at editing, as even a cursory listen to the ‘umm’-infested early episodes will illustrate. Practice makes decent, baby.

Most importantly, we’ve gotten past those awkward initial recordings and I now consider that at times insufferably argumentative, but ultimately brilliant man (who whips all of our asses at audience engagement) to be my friend. And boy was that friendship needed to get us through our one hour debate about Dark Phoenix.

So thank you again, Mike, first for providing me with a path out of the aimlessness of unemployment, and then much later giving me free reign to transform your website into this multi-headed monster.

Eleven thousand listens across 200 episodes is still relatively small time in terms of numbers in the podcasting world, and we definitely still have a lot of improvements to make (I would love us to do more regular written content and eventually get into video), but given how this all started (and that not a single person who contributes to The Reel World lives in the same freakin’ city) I’m still proud of those numbers.