It’s tough to say television in 2017 was great, but there was certainly a lot of it, over 450 scripted shows across hundreds of channels and streaming services. There’s no possible way to watch all of the good shows. There’s now even the chance you’re not even streaming the great shows. I didn’t even have the opportunity (or desire in some cases) to watch The Handmaid’s Tale, Twin Peaks, Speechless, One Day at a time, or Better Call Saul. These ten shows are ones which made me laugh, cry, and contemplate through all of 2017.

It’s funny to think that one of the most power and important corporations in the world has a streaming service, a service that has now fallen behind both Netflix and Hulu in my power rankings and in the minds of so many. Amazon still features a couple important shows. While Transparent  was disappointing and seems to be long in the tooth, Sneaky Pete was an early 2017 highlight. Giovanni Ribisi is one of those actors who’s been involved with another projects but has never found a meaty leading role. This was a huge opportunity as Bryan Crantson was involved first as an executive producer and then as a big bad once the show went from CBS to Amazon. This began as a CBS vehicle, and the pilot feels like it. Once the second episode hits, it becomes a well executed genre show in the vein of Justified and even occasionally Breaking Bad. There are some fun supporting performances from Margo Martindale among others. Coming out in January likely hurt its standing with critics at the end of the year, but this is an easy watch and a lot more palpable than so many other dramas currently on the air.

I didn’t know how much I needed Hank Azaria as a baseball announcer in my life until the first episode aired.  This could have easily functioned as eight episodes of Azaria riffing on announcer tropes and delivering one liners, and it would have still probably been a hilarious show. Amanda Peet and the writers elevated this into IFC’s first actually good show (Take that Portlandia). We see how sad Jim Brockmire’s life becomes after he finds his wife embarking on sexual escapdes and getting fired from his MLB job. Each episode has moments of levity but also serves as a cousin to a show like Bojack Horsemen in that it is not afraid to discuss issues of depression and what it means to be happy. Azaria and Peet carry the emotional center of the show and their relationship takes some surprising twists, including the ending which will leave Brockmire in a very different position in season two.

I can identify with Aziz Anzari’s character in Master of None, probably moreso than most other characters on television. Just as he went to Italy to find himself and explore the world, I did much the same going to China and traveling around Asia. Ultimately though, we have to come back home. It’s amazing to think how a black and white season premiere is probably the 6th or 7th most memorable episode of the show. This is a show which explores sexuality in a powerful Thanksgiving episode, the many different kinds of people in New York who aren’t Aziz and his friends, and manages to tell a love story in New York in a completely fresh feeling way.  There are so many of these “singular vision” shows on the air. Most of them are quite good, and I could certainly talk up One Mississippi, Insecure, and Better Things. I feel able to connect with this show and appreciate how unique each episode is. 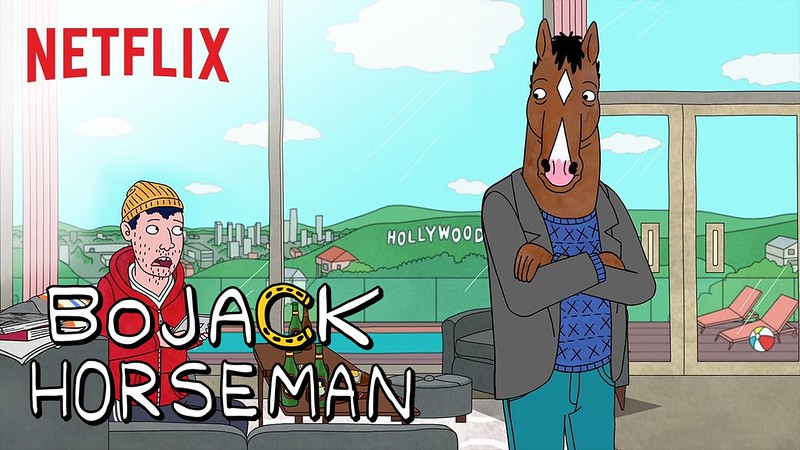 This is my favorite show on Netflix. I did a huge rewatch of the first three seasons and wasn’t sure where else the writers could take our favorite acting. That third season goes to some dark places, climaxing with Bojack running away. He becomes more of a supporting player in season four as the show focuses on Mr. Peanut Butter running for governor and Bojack’s mom dealing with dementia. One episode specifically shows the dementia and how it manifests itself. An earlier episode shows how Bojack consistently self-sabotages through his own warped thinking and depression. We also meet Bojack’s presumed daughter and see their relationship develop. The question examined is whether their relationship can actually work or will it go off the rails like so many others. I’m not sure how much longer the writers can continue to tell this story, but this is rapidly ascending my list of best animated shows ever.

A show about porn starring James Franco in two roles should not have worked in 2017. It did because the producers brought some important female crime writers into the writer’s room and Maggie Gyllenhall served as one of the stars and executive producers. I rarely saw The Deuce as being exploitative. It was at all times a continued examination of the dangers of capitalism and the complicated relationship between the law and the lawbreakers. It was able to continue on with some of the same themes explored in The Wire while also complicating what it means to be a pimp or a prostitute. Many times, this show was also hilarious and you just wanted to hang out with these characters for an hour every Sunday. I’m a huge fan of all of Simon’s work, but I was skeptical in this case. This ended up being the rare case of me coming to the end of a season and wanting more.

Can you imagine if this show aired at the end of 2017 instead of the beginning? Some of the themes and the ultimate pay-off would have worked even better artistically amidst the discussions of sexual harassment and male empowerment. This was pulpy in that it featured a lot of rich people drinking wine out of large glasses on even larger kitchen islands while staring out even larger windows in their houses on the beach. Reese Witherspoon and Nicole Kidman gave excellent performances and really carried the pathos of the show. Alexander Skaarsgard and Adam Scott lent excellent support in underwritten on purpose roles. Many of the other supporting characters were seen being interviewed by the police, and those scenes seemed to be out of a different show. This was the one blemish in otherwise home run of a show. HBO desperately needs more shows about women and people of color. Hopefully, this was the start of HBO’s expansion into different kinds of shows. 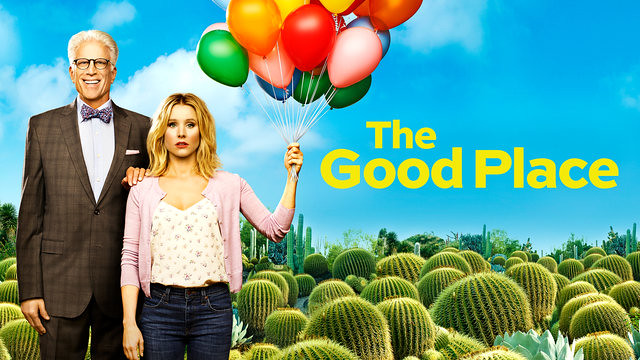 It’s extremely hard to talk about a show like this without revealing spoilers, but I’m going to try. Network television sitcoms generally are not very plot heavy and do not rely on serialized storytelling. What makes this show different is that Michael Schur was seemingly writing one show during its first season only for the finale to reveal that the show was really something else entirely. The premise is fairly heady in itself as four people end up in heaven, and two of them are definitely not supposed to be there. The show discusses ethics and philosophy in very intellectual ways throughout the first 1.5 seasons. Season two burns through plot in its first eight episodes and even from episode to episode, it’s tough to tell what The Good Place is going to be about. To have a show like this which is genuinely funny, to have stand-out performances from both the recognized and unrecognized names, and to tell an excellent story takes me to a good place of my own. This show is awesome, and you should start streaming season on Netflix right now. I’ll have more Netflix homework for you later. 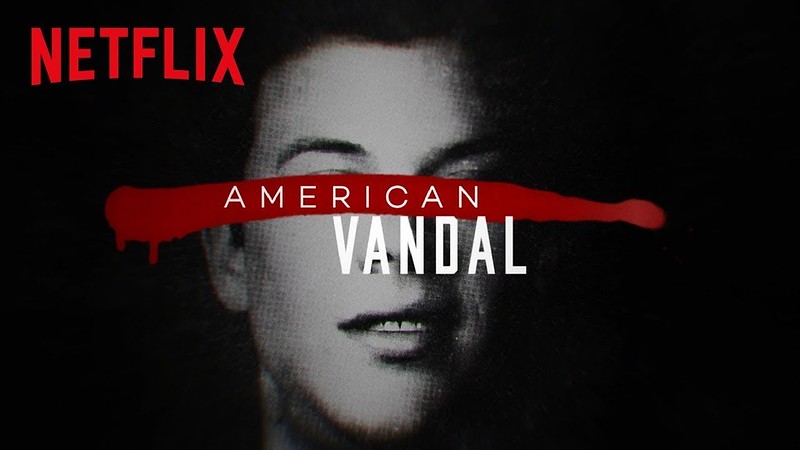 Some people want you to believe Netflix has created a show about high school that was a powerful examination of what life is like for white millennials everywhere, a show that will challenge your perceptions of how certain people behave. This is a show with a tremendous performance from a person who we’re not quite sure what to think of, even by the time the credits roll on the last episode. 13 Reasons Why  definitely was not that show. American Vandal  was. “Who drew the dicks” is almost as well known a catchphrase at this point as some of the real true crime incidents discussed in The Jinx, Making a Murderer, and Serial. This was a mockumentary that not only hit some of the same territory as 13 Reasons Why but also critiqued the tropes of all the various true crime shows. Eight 30 minute episodes seemed impossible for a one note parody. This elevated beyond the parody and turned into something genuinely powerful. This snuck up on me during the fall and has stuck with me. I can’t imagine looking at the true crime format the same way again.

No one watched this show or the final show on this list. If you’re reading this, go to Netflix and watch all 40 hours of this show. Some people will tell you to skip the first season. Those people are insane. It’s important to watch this show go from a Mad Men rip-off to one of the most genuine shows about relationships created in the last ten years. This show focused on the Complicated Men at first. Lee Pace played a Don Draper rip-off named Joe while Scott McNairy played Gordon. Once the show realized the real story was in the lead female characters, Kerry Bishe as Donna and Mackenzie Davis as Cameron Howe, Halt and Catch Fire became a dynamic and complicated examination of when it means to have really good ideas but not always be able to achieve your dreams. Even until the waning moments of the last episode, the writers always allowed their characters to have ideas. Without spoiling the incredible last season, there is an entire episode written by Zack Whedon that features the lead characters in a house…talking. If you watch the first 3.5 seasons, then this will be a knock-out of an hour because the performances are great and the conversations they have remain relevant now. AMC loves promoting The Walking Dead and Preacher, but they were still airing one of the best shows ever this year. 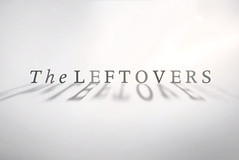 Not the easiest show to watch, especially the first season. The second season is a complicated watch too, but the third season is Damon Lindelof seemingly looking at what he did with Lost and saying “Fuck it.” The following are all things that happened on the final season of The Leftovers. I have to spoil some things though, but you should go and watch this show too.

1.) An episode starts with The Perfect Strangers theme, has a cameo from one of the leads, and makes sense within the context of the show.

2.) An entire episode takes place on a lion sex boat.

3.) A possible manifestation of God gets eaten by a lion at the end of that same episode.

5.) A Wu-Tang Clan song gets played while two people are jumping on a trampoline…and that also makes sense.

6.) One of the lead characters supposedly goes to another dimension.

7.) The end of the series features the two main characters talking. One of them may be lying, and it’s the perfect ending.

Tomorrow I’ll finish the list by going over nine of the films that really helped me keep my sanity while I was in China and then when I came back to the states.

4 thoughts on “The Top 25 Pieces of Pop Culture That Distracted Me from a Terrible 2017: TV Shows”