Here is the same article but on The Whedon Cut.

Ray Fisher had this locked up, but then Affleck ended up on top here after the one final brilliant note to his characterization. Then I re-watched it again and realized that Ray Fisher is just too damn good here, and Victor is too responsible for the (shockingly effective) pathos to the story. The notion that anyone could think that a version of this film could work without him at the center (if not the front) is just fucking insane. Ray Fisher is clearly a tremendous and hopefully manages to get significant opportunities going forward. [He is so good here that I feel as though I have no choice but to finally watch True Detective: Season 3.] 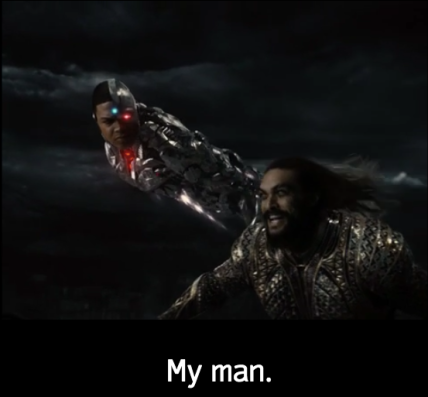 The two contenders here were the two characters that got the least important work to do and that would be Gal Gadot’s Wonder Woman and Jason Momoa’s Aquaman. Despite Gadot’s limitations though, her Wonder Woman at this point feels like a mostly fully-realized character due to her already having a solo film and a solid backdoor introduction in Batman V Superman. Aquaman though was really an unknown quantity at this point. And unlike Victor and Barry, his arc felt far more rushed and much less effective as a result.

At the end of the day, the villain of this film really did not matter a great deal. It was however quite nice to see the original version of Steppenwolf and at least given him some type of motivation beyond deluded monster. His desire to restore his image in the eyes of Darkseid was at least **something** and that is not nothing! Darkseid on the other hand seems pretty boring, and it was a good thing he remained on the sidelines here.

Against all the odds, this was quite good and enjoyable. Zack Snyder got to make his complete and full vision for this film, and of all the stories he has told in the worlds comic books becoming movies, this was clearly the story he was most meant to tell. It is still Zack Snyder though and a lot of aspects about his POV, visual style, and general sensibilities are not really my favorites. A trend that is developing though is that it’s clear that the theatrical versions of his stories feel incomplete and leave you with nothing but the unpleasant qualities. The stories normally don’t hang together, and the characters normally seem too thin drawn. Here though (and to a lesser extent in the Ultimate Edition of BvS) the characters are the backbone of the story and the story is much closer to a necessary level of coherence. Snyder’s very dumb version of The Fellowship of the Ring was a success. Could, if given the opportunity, Zack be able to create an effective follow-up? Probably not! It all came together here though. Big Thumbs up!