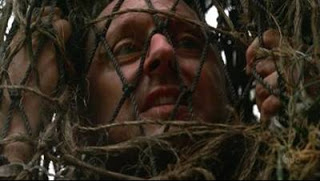 Two episodes lead to two dynamic changes. First, Sawyer flexes his con man muscles to take back what he feels is rightfully his. Then, Sayid flexes his “interrogation” muscles when Rousseau captures a man named Henry Gale, who may or may not be one of the Others. In our flashbacks we see one of Sawyer’s emotions potentially ruin one of his bigger cons, and we learn how Sayid learned his skill of torture – and it’s likely not in the way you’d expect.