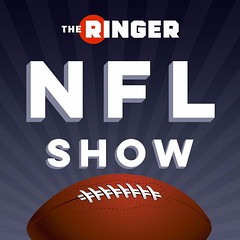 For a number of different reasons, 2017 was not the best year. There were external and internal factors. Thankfully, we live in a world where we can distract ourselves. This can also have a negative affect, but part of practicing self-care involved enjoying movies, television shows, podcasts, and books. Many of the books I read weren’t necessarily from 2017, but there are number of things I’ve watched and listened which have provided me moments of contemplation and of laughter. I’m dividing this into three parts and starting with podcasts. Tomorrow will be television shows and I’ll end with movies on Thursday.

A podcast about the current occupant of the White House could be considered part of my regular consumption, but the laser focus that comedians Dave Anthony and Gareth (not Gary Reynolds) have on this episode is worth mentioning. The focus is on his personal journey and how he came to be a racist, homophobic, misogynistic piece of garbage.  Understand his belief in eugenics and how his father raised will make it clear how 45 has developed his Neanderthal belief system. The Dollup is an American history podcast unlike any other. It is hilarious, like actual belly laughs out of me, and focuses on some of the more absurd aspects of life. Anthony, who does the research for the show, is not afraid to point out the problems in America. At times, I find myself laughing while also wanting to cry at how dumb this country is. Episode 300 (divided into two parts) is the best representation of this podcast

I’ve worked in colleges for a number of years and have become increasingly aware of how they don’t prepare people for the realities of the world. Millenials and many older people will likely have to change careers multiple times. Not many colleges will tell people this fact. I’ve never seen a documentary, read a story, or listened to a podcast that gets into as much detail about why our education system needs to be completely rethought. This is a fantastic conversation involving Cracked staff. They highlight their own personal experiences with changing jobs and how they intend to parent their children. This podcast will make you rethink the purpose of college and how well we are (aren’t) preparing people for the future.

I’m not sure this podcast should exist because the ethics involved with teasing a man’s death at the end of an episode seems fairly skeezy. This is a podcast from the people behind This American Life  and Serial, giving it a journalistic shine that it probably doesn’t deserve. If this were a true “best,” list, I would not even put this into consideration. It was an excellent narrative that purported to follow a nobody in a “shit town.” There are many twists and turns along the way which I don’t want to spoil, but it’s a fascinating examination of small town America and the complicated characters who live in this country. Most importantly, S-Town talked about issues of mental health which are most definitely not discussed enough.

It’s important to understand the role of social media in our society, but it’s hard to take a broad look because there are so many macro and micro issues. Seeing how ESPN, a worldwide organization part of the most important entertainment company in the world, handles social media is an important litmus test for every industry. Miller has written  a couple of oral history books, including one about ESPN in 2010, and clearly has a number of sources to tap into.  What I like about podcasts as a medium is they can’t really solve problems but by their very nature, they can continue conversations that simply don’t happen on cable news, radio, or books.

21. How to Be Amazing w/ Michael Ian Black: #50 Amani Al-Khatahtbeh and #69 DeRay Mckesson

I’ve always been a fan of Michael Ian Black’s dry sardonic delivery whenever he was on those VH1 flashback shows, but he really excels at bringing in a wide range of guests on his podcasts. He has had more famous celebrities on his show such as Amy Schumer and Neil deGrasse Tyson, but he also has activists and marginalized voices. Mckesson is a former teacher turned activist who hosts his own podcast and is an inspiring voice within the Black Lives Matter movement. Al-Khatahtbeh reviews her own experience as a Muslim woman, and I learned a great deal about the possibilities of a Muslim feminist. Michael Ian Black is honestly a must listen for me any week, but these two episodes in particular were stand-outs.

Sports shows in any medium are generally very tedious to watch or listen. Many times the hosts are more concerned with razzing each other while spouting clichés and speaking in platitudes. Tune into any NFL show in particular and these issues are magnified. The nice thing about this podcast is they’re not beholden to having former players on. Kevin Clark and Roberts Mays are two intelligent writers who understand the game and look at the league through a wide lens. Very few podcasts can break down offensive line play while also not being afraid to assess the ratings issues this league has faced in 2017. Through it all, they maintain a love of football and bring an enthusiasm which comes off genuine. Fandom of this league can be problematic, but The Ringer NFL Show allows for conversations beyond the field.

I’ll continue on tomorrow with numbers 19-10 as I look at ten television shows that made me feel like maybe the world shouldn’t end.

4 thoughts on “The Top 25 Pieces of Pop Culture That Distracted Me from a Terrible 2017: Podcasts”