Yes, it is I, a man, here to explain the female dominated Landline. In all seriousness though, this film is fucking brilliant. My perspective is obviously skewed by being a man so make sure you check out female perspectives on the film as well!

“I’m not even sure if I’m allowed to ask these questions.”

Landline, one of the best films of the year, tells the beautiful and human story of three women (a mother and two daughters) who are all going through various stages of feeling lost or unsatisfied with life and the trajectory they are on.

The main character is Dana, played by the infinitely lovable Jenny Slate. Dana is a late twenties woman who is suddenly feeling incredibly conflicted by where her life is going. Her relationship (with Jay Duplass’ Ben) has basically reached middle-aged pace already, and that happening at a young age can be absolutely terrifying.

Dana’s sister, Ali (played by Abby Quinn), is still in high school and clearly in the cliche “rebellious” stage of life which involves lots of drugs, alcohol, and lying to your parents. The film makes it seem like Ali has made more “mistakes” in the past week than Dana made in her entire life.

The trio of female characters is rounded out with the sisters’ mother, Pat (played by Edie Falco). Pat is middle-aged, is in a deeply unhappy and seemingly loveless marriage (husband played by John Turturro), and is so dominated by feelings of deep regret that she has become overbearing in her daughters’ life (with her daughters responding in completely opposite ways).

Combined, these three characters tie beautifully together within the bubble of this one specific story while also speaking to the pressures and feelings that many women face.

Pat’s lack of satisfaction with her life (and particularly her marriage) clearly has had an enormous impact on her daughters.

Dana has lived “perfectly” all her life. She seems like the kid who always did the “right” thing and never got into any trouble.

That has led Dana to a point in her late twenties (ish) where she is in secure job (presumably based on what little we see) and a very safe engagement with a partner who seems all too ready to settle down in an early middle-aged existence.

Dana understandably has a moment of crisis due to the way her life has now seemingly already been planned out for before she even had a chance to question whether or not what life she really wants to have.

Dana then goes through a period where she cheats on her fiancee with an old college flame, starts blowing off work, moves back in with her parents, and just generally lives a life that some would consider “irresponsible.”

(In reality though, Dana just goes through a very common phase that happens to many people in young adulthood. They/we start making less-than-desirable choices because they/we are panicking that the “right” choices are not actually right for them/us. Beyond being dishonest with her fiancee, it’s important to not view Dana’s behavior here with much in the way of scorn.)

For Ali, growing up in the home has likely contributed to her desire to sort of tell the world to “Fuck off” as much as possible.

While all teenagers go through tough times with their parents, Ali casually doing heroin in nightclubs at 17-18 and regularly lying to her parents about pretty much everything certainly puts her on the extreme end of things.

In less dramatic examples of it though, she’s also clearly hesitant to get attached or commit to anyone (or possibly to anything) as she assumes it will just fall apart and everyone will be hurt by it.

Throughout the course of the story, these three women are forced to confront themselves and find out who they are and who they want to be. The film never sits in judgement but instead provides emotional context for the decisions made.

All the while Landline gives the audience an under-represented perspective on what it can be like to go through life as a woman when you’re conditioned by a patriarchal society to believe you have no say in your choices.

The film is brutally honest, hilarious, painful, and at all times empathetic for everyone who steps into the frame. More films like this please. 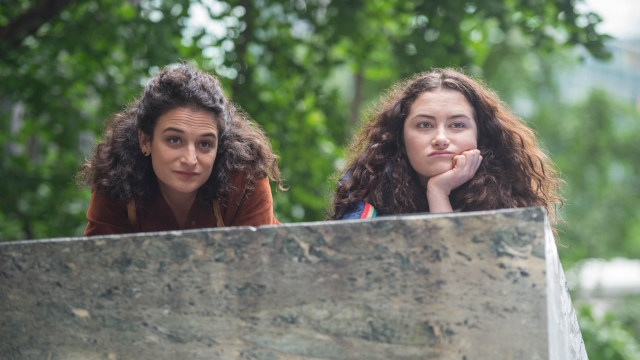