Justified was one of the most fun shows of this century. It is a rare television show in the modern that understands the basics of television programming (TV is supposed to be fun) but that you can still execute it so well that it feels like something more than just a way to get audiences to watch commercials.

Okay, I initially HATED this season, and in my memory I always assumed there was no way it could possibly be any good. Re-watching it now though proved that it was perfectly fine, and my reaction at the time was extreme. While there are plenty of side adventures – some successful (Ava in prison) and some less successful (Boyd in Mexico) – to occupy the wide range of characters that somehow end up in Harlan County, the core of the season came down to the big new conflict Raylan Givens and The Crowe Family. That is right. Dewey Crowe has a family, and they came to town. The Crowes most closely resemble the dynamic that the Bennetts brought to the show: extremely chaotic family involved in crime. The key difference is that the family’s version of Mags died before they got involved in the show so they are extremely dysfunctional and as a result, much less compelling. It’s all fine enough though and makes a solid season of Justified overall.

I must confess I am not confident in saying that this season is better than season 5. I fear there is a possibility that my bias against The Crowe Family is playing too large of a role in my final decision. Maybe if I ever am able to go through the show again, I will have a stronger sense of how I feel. Alas, let’s take a look at this very mixed bag of a final season.

One of the marks against the season is the tone. At its core, Justified was historically just a very, very fun program. Sad things happened of course, but it was not the norm or dominant emotion. The final season of Justified is just downright somber. That feeling is captured best by the final journey of Boyd Crowder. After four seasons of essentially redeeming Boyd as much as possible within the context of who he was and the show in general, the final two seasons stripped Boyd of much what his character was holding onto. As he lost more and more of what kept him centered, he began to cling to what little he had left with more ruthlessness and reckless abandon. And it was just depressing to see him throw everyone around him to the wolves for money. And yes, the money was not just about the money – the money was the power to escape his current life. On some level, it is the most fitting and appropriate way for Justified  and the story of Boyd Crowder to end. But it was fundamentally just a heckuva lot less fun and really speaks to the final season in general.

The Drew Thompson mystery element of this season was a real zag after the show had been zigging us for a long time. The show established a routine of where there is always gonna be some balance of standalone and serialized stories (with each of the first three seasons tilting one way or the other) and there was going to be a big bad who got what was coming to them in the finale. They went in a completely different direction here as three-quarters of the season was based around the mystery of whatever happened to Drew Thompson. After slowly building up Jim Beaver in seasons 2 and season 3, he became a major part of this season even before the reveal that he was said Drew Thompson. The show also managed to do a number of great arcs for Raylan, Tim, Boyd, and Ava from the main cast and do a number of satisfying stories with new and old minor characters that gave this season so much depth. This season ages exceptionally well. 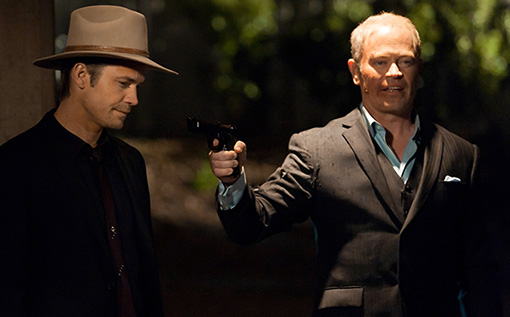 Season 3 felt like an organic extension of season 2 while also trying to up the ante in all ways (which were all more or less successful). Coming off the “epic” feeling caused by the Mags season, it felt like Justified felt a need to go bigger here. That is normally a source for concern, and there is no question that season 3 could not match the quality of season 2. Despite that though, season 3 manages to escape out of the shadow of preceding season and become quite successful on its own terms. The most clever thing they do is escape the temptation to go with “more is better” that they teased early on. It felt like Quarles and Limehouse were both going to be big bads in a misguided attempt to top what went on with Mags. In a very clever and earned reveal, Limehouse is really not a villain in this world. He truly just wants to protect his community and be left the hell alone. Quarles then became the closest thing to the “Joker” that the show ever allowed itself to go.

It is hard to imagine a better start to this show than what we got here. They managed to introduce the world perfectly, establish a variety of major and minor conflicts that would pay off in this debut season and the five additional seasons to come, and then manage to essentially perfectly balance the combination of purely episodic stories and villains along with a fully satisfying serialized arc that carried everything from pilot to season finale. Timothy Olyphant firmly established his television star persona here and just carried the show in a manner that seemed effortless. Other highlights included the introduced of Walton Goggins’ Boyd Crowder and Olyphant’s tremendous chemistry with his co-workers and women of his life.

After a very strong debut season, Justified managed to accomplish becoming a fully formed show in their second season. They somehow managed to get better at every critical aspect of the show. The show managed to get even better at blending the episodic and serialized elements, created an even more compelling big bad, expand the world of the show in exciting ways, and evolve the characters in a satisfying manner.

The highlight of course was Margo Martindale’s Mags Bennett and all things with the Bennett clan. Each of her sons brought something interesting and unique to her to the dynamics of the season and the conflicts that developed.

The other two particular strong points for the show were the development of Boyd Crowder’s character and the deteriorating relationship between Art and Raylan. As Raylan desperately tried to escape the path he was put on by being born to his father in this location, Raylan desperately tried to pretend he could not understand why a boss of his would be completely over him.