I will be checking out these Justice League animated movies as much as possible. I will be using the same four questions I use here to assess each film. Matt and I actually discussed this film before. I have no memory of making this podcast! [I am listening to it right now. Good episode!] 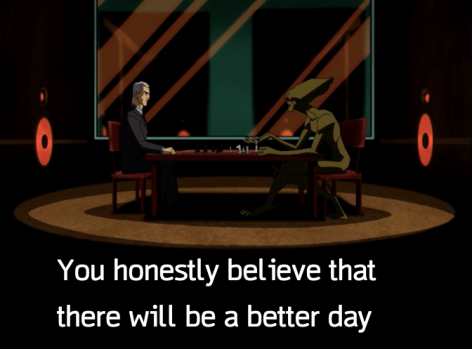 Martian Manhunter rules. Oddly enough, he is one of the few superheroes that feels like a human being. His look was distinctly cool here. Miguel Ferrer (#RestInPeaks) was great with his voice work. More films need to leverage his unique presence in the films.

Hal Jordan is fucking annoying! I am sure that the millions and millions of you reading this are growing tired of reading about this complaint. But he’s just annoying and not funny whatsoever. I don’t get it. What is to enjoy about him?

The unknown entity element actually kind of worked here, as it forced the story to create conflict and tension that was much less obvious and perfunctory than the typical Justice League story. Good job here. The more creative the Justice League films are forced to get with their villains, the more compelling the stories generally end up being.

BUT DESPITE THAT, this movie is largely dumb and with an incredibly rushed story. I really hate ever suggesting this, but this movie would be much better off as a mini-series. There was just too much going on here, and it needed to be properly fleshed out. The dumb things stick out more as being very dumb when you cannot explore them at all. Mild Thumbs Down.