Self-explanatory article! (For real this time!)

The least controversial thing you can do when ranking the seasons of The Wire is label the final one as the weakest. But it is frankly deserved. While the overall themes and ideas behind the season were perhaps dunked on a bit too much, there’s no question that McNulty and Lester creating a fake serial killer felt a little too unreal by the rules of the world even comparison to the ridiculousness of Hamsterdam. That being said, that is not a totally rational analysis of that comparison! Both stories are about the institutional indifference to the forgotten underclasses of society but somehow the serial killer thing always “felt” wrong.

Now for the controversial shit. How does one rank seasons 1-3 of The Wire says so much (but not really) about a person!. For me, I have them at all around the same in terms of quality so I have had to look for some relatively arbitrary tie-breakers. The biggest flaw of this season will forever be the idiot Sobotka boys. Pablo Schreiber has really grown into a damn fine actor over the last decade, but he was not quite ready to carry the show on his back which is what he was asked to do for much of the season. And Ziggy, while performed pitch perfectly by James Ransone, was just TOO annoying to be such an integral part of the season. Again though, the season was great in spite of those two (significant) issues.

This season does just so many things well. The biggest thing though is the conclusion to the slow death in the relationship between Avon and Stringer. Whenever you watch parts of season 1 – yes the seeds were planted – you can’t believe that B&B Enterprises could ever disintegrate. Not only does it happen in season 3 though, the show manages to execute it in both a subtle, sudden, shocking, but also slow burn manner that manages to make it feel completely surprising while also making all the damn sense in the world. 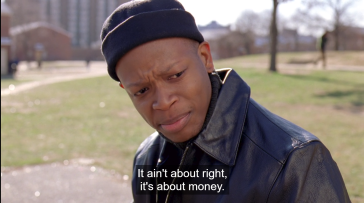 While the police would forever be the least interesting institution examined by The Wire due to their obsession with the false notion of “good police,” the slow introduction to the world of the show here is just excellent. The show instantly mastered the ability to introduce dozens upon dozens of characters and making all of them feel like whole human beings instead of just pawns on a storyteller’s chessboard. 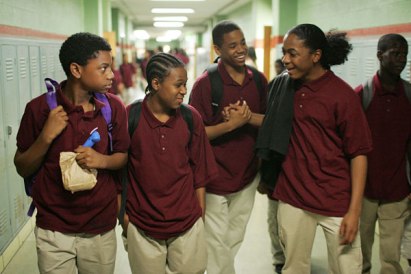 Almost as boring as labeling season 5 the weakest is the decision to call season 4 the best season of The Wire. Similarly though, the boring decision is the right one though. Yes, every story was amazing, all the performances were tight as fuck, and the ability to introduce four teenagers as the leads of the season and to do each one justice was absolutely remarkable. The bigger accomplishment though was how this season connected everything that came before it. The ways they kids get fucked over by the world in their formative years explains so much of what goes wrong for the adults of West Baltimore in the years to come that were analyzed in the earlier seasons. Tragically, the show does not advocate for revolutionary change and merely feels comfortable saying everything is hopelessly broken. But I suppose it’s better than nothing.