Plot summary: The enigmatic Mr. Freeze unleashes his icy revenge on GothCorp, besting Batman time and again in the process.

BOY how about that trailer for The Batman, huh?

To cap off the litany of glowing reviews for this episode, it won a Daytime Emmy Award. The show would be nominated for many of these, but only won 3, with the other two being for sound and music. More on this in about 20 episodes’ time…

Anthony Hopkins declined the role of Mr. Freeze. A slightly less optimistic offer than Al Pacino for Two-Face, but come on, guys.

Spectrum Animation Studios went bankrupt working on this episode due to the painstaking detail they put into the snow and ice effects, including extensive airbrushing of Freeze’s helmet.

Bruce Timm ended up directing this episode himself because of how behind schedule they were.

Timm & Dini regretted not making Freeze’s tears turn to ice/snowflakes, an idea that would find its way into Batman & Robin.

Mark Hamill was originally only contracted to voice Ferris Boyle and it was only after Tim Curry dropped out of playing Joker that he booked the second biggest role of his career. Luke Skywalker is pretty tough to top.

Mr. Freeze looks into a snow globe with a ballerina in it, lamenting about his lost love, vowing revenge.

Summer Gleason (remember her?) reports on a series of crimes perpetrated against GothCorp by an unknown individual armed with a “freeze gun”. GothCorp CEO Ferris Boyle is quite sure he doesn’t know what anyone could have against their company given how well they treat their employees. It should be noted that this news report, like many others in the show, is in black and white. This is part of a conscious effort to give Gotham an anachronistic vibe. 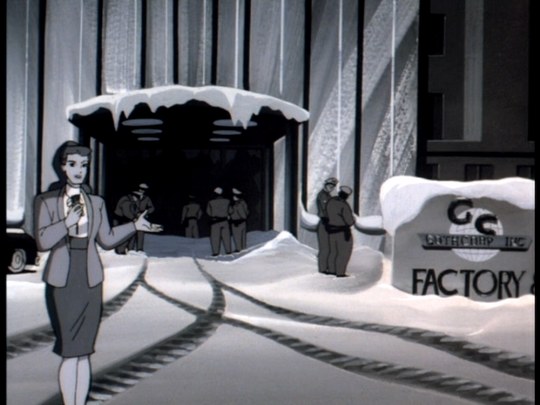 Batman analyses the various items stolen from GothCorp, deducing that when configured in just the right way they could assemble an enormous freeze cannon.

Believing one last component is needed and knowing which plant manufactures it, he goes full throttle in the Batmobile to intercept. Mr. Freeze aims his weapon out the back of the large armoured truck and despite his best efforts, Batman goes skidding out. Turning his attention to the door, Freeze turns it to ice, allowing the truck to smash straight through.

Freeze blocks security’s way in and has his men start loading the truck. Batman takes some of the henchmen down but Freeze is able to stop one of his batarangs in mid-flight. Freeze calls this a personal vendetta and asks Batman to step aside, but obviously the Caped Crusader will have none of that.

The villain fires his gun with no regard for his own men, freezing one of them from the waist down. Even Batman’s valiant attempts to dodge end with him falling through a weakened platform, leaving him wide open for a direct hit.

Freeze orders his men to roll out, leaving the frozen one behind as he desperately crawls across the floor begging them to come back. Freeze dismisses him, stating he should have been more careful. Ya know, when he was minding his own business and got shot by his own boss.

Freeze goes so far as to threaten to do the same to the others, so they wisely board the truck and drive away. Batman bursts free but it’s too late. Heavy.

Later in the Batcave, Bruce runs tests on the unlucky henchman, who floats in a huge vat of chemicals. His measures ultimately work and the crook is de-thawed, but Batman… has a cold!

Bad timing too, because Bruce has a meeting booked with Ferris Boyle, which he uses to gently interrogate the GothCorp CEO to try and figure out why Freeze has a vendetta. Boyle drops some of his “we’re a people company” shtick now that the press aren’t around, and Bruce is disgusted. 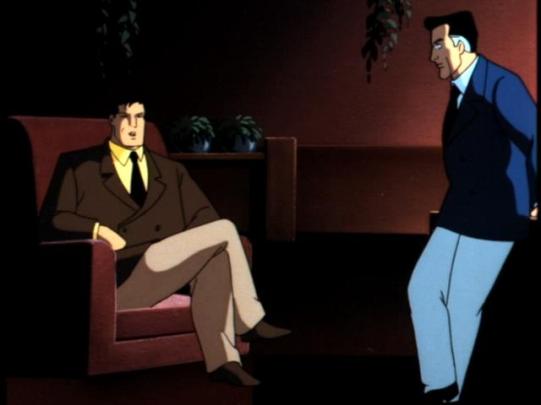 Following up on a throwaway comment, Bruce looks through media coverage on an explosion at a GothCorp facility the previous year, but finds it frustratingly vague. When he endeavours to break in and uncover the truth, Alfred insists he take a thermos of chicken soup to treat his cold.

Sure enough, Bruce is quickly able to find some Top Secret files on a Dr. Victor Fries. He fires up a suspiciously well-shot recording of Fries explaining a cryogenic chamber intended to buy more time for terminally ill patients like his wife, Nora. 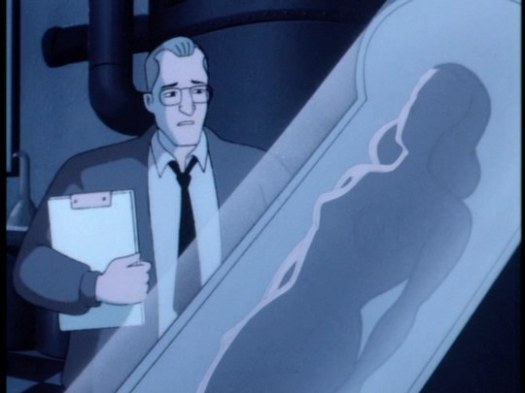 Ferris Boyle barges in with security and shuts the project down, feeling it’s a waste of money. Fries freaks the eff out because Nora will die if they pull the plug, and after a struggle Boyle pushes him into a bunch of chemicals. Batman is stunned, so much so that he doesn’t hear Freeze come in behind him, weapon ready.

Awakening hanging upside down from the ceiling of Freeze’s lair, Batman expresses his sorrow for what happened to Nora. He accurately surmises that the suit Freeze wears is keeping him alive, with Victor confirming that he can no longer survive long term at room temperature.

Freeze monologues about his plan to use the cannon to rid everyone of warm summer days, presumably so that he can walk around without his suit, or maybe just to be a dick. He and his men depart, not realising Batman will instantly escape any predicament when left alone for even a second.

Rolling up to Ferris Boyle’s award party, Freeze unleashes his fully assembled cannon on the building. Batman puts a stop to it and chases Freeze inside. Victor confronts Boyle, who doesn’t recognise him but begs for mercy as he’s gradually frozen from the ground up. Batman disarms him with a batarang while he’s mid-monologue but proceeds to get his ass kicked thanks to the enhanced strength Freeze’s suit affords him.

Remembering Alfred’s parting gift, Bats pours the chicken soup onto Freeze’s helmet, causing it to crack from the sudden temperature change. Freeze drops to his hands and knees, desperately trying to finish the job, but collapses. Batman hands Summer Gleason (remember her?) the evidence of Boyle’s actions and then wishes Ferris a sarcastic good night, leaving him frozen to the ground.

In a special snowy cell in Arkham, Freeze looks longingly at his snow globe again, begging Nora for forgiveness, feeling he failed her. Batman looks on from a nearby rooftop. 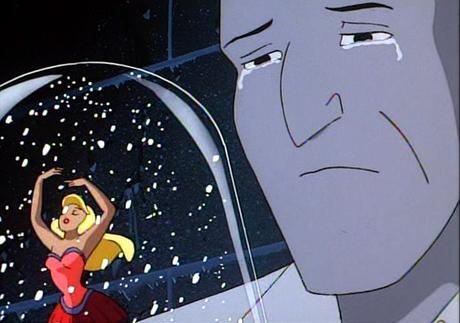 Michael Ansara’s voice lives forever in the memory of anyone that’s seen this episode, and for good reason. While the actor had a frustrating time performing the role, with Bruce Timm constantly asking him to be less emotional, I think it worked out for the best.

Timm had conceived the idea of his near-death experience leaving him devoid of feeling, so kept pushing Ansara to be more flat and robotic. I can’t imagine it any other way, and almost every actor who has taken on the character since this episode has followed suit. Except Arnie, of course.

If Tim Curry had never dropped out, Ferris Boyle might have been Mark Hamill’s only contribution to the show, which is unthinkable 30 years later. During the heights of Boyle’s evil mania he does start to vaguely drift into Joker territory, but the rest of the time it’s barely recognisable as Hamill, which is a compliment. Seriously, if not for how iconic Ansara is, I might be tempted to make a very controversial decision. 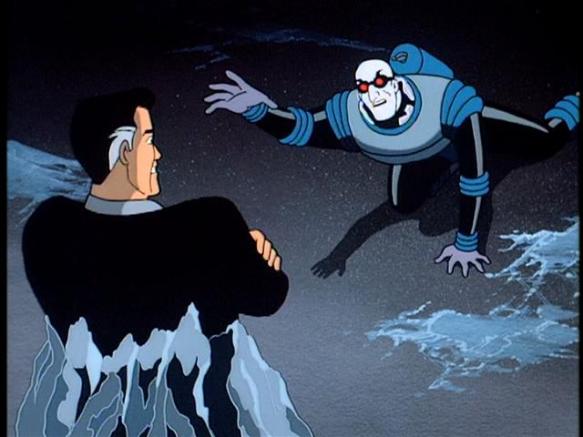 I’ve watched this episode more than any other, and despite thinking it’s a smidge overhyped, it’s undeniably excellent, following the blueprint established in the Two-Face two-parter. Both gave a classic Batman villain a fresh coat of paint, though admittedly Two-Face didn’t get the same shot in the arm that ‘Heart of Ice’ gave Fries. Harvey’s emotional journey is made richer by his previous appearances in the show, and Richard Moll’s voice work spanks Michael Ansara’s, but this episode is such an overwhelming force of creative will.

Paul Dini had a clear vision and Bruce Timm’s crew executed it elegantly. It has that hint of mystery I personally crave, but I think its greatest strength is that it unlocks every single aspect of Batman:

Honestly, while the legacy of this episode is what a showcase it is for Mr. Freeze, I doubt we’ll see a better demonstration for the title character’s multifaceted abilities and personality while also finding the time to develop the villain.

This rendition of the character was so good that most people don’t realise Mr. Freeze was a nothing villain before this episode. In fact, he’d been killed off in the comics by this point. There was no Nora. No tragic backstory. No sympathy. No unfeeling robotic attitude. Just a freeze gun.

This episode was so immensely popular that Freeze was resurrected and has enjoyed top-tier Rogues Gallery status ever since, with his backstory re-written to match ‘Heart of Ice’. There is zero chance Arnold Schwarzenegger plays him in a $160million movie without this episode, and his arc in the film is basically the same, but with far more camp and a plethora of puns.

Freeze has more success against Batman than anyone we’ve seen to date, and I don’t think anyone will hand it to him this badly again. Besting the legendary vigilante over and over again leaves the viewer with memories of Freeze being a beast, and that’s the stuff that sticks out decades later.

This kind of indelible impact on the franchise can’t go unrewarded, and while I do believe Joker will reclaim the top spot by the end of the show, this is the kind of villain superhero properties have been chasing for decades.

Speaking of my podcasts, There Will Be Movies returns tomorrow with Short Term 12.

Jerome & Brian’s Pantheon Plus continues its coverage of the Beverly Hills Cop trilogy.