Plot summary: Six months after his transformation, Harvey Dent, now calling himself Two-Face, wreaks havoc on his old rival Rupert Thorne. But Batman hasn’t given up hope for his former friend.

As mentioned last time, Al Pacino turned down the role of Two-Face. Nevertheless, Harvey’s line “For the next five minutes I’m in control” is a quote from Dog Day Afternoon.

When Harvey opens his wallet you can see a credit card poking out that says Two-Face… I have SO many questions.

Our first “Previously on Batman” of the series! It skips to the end of the episode with Harvey’s accident. Obviously you don’t want to take up too much time replaying things that already happened, but that slightly undercuts the great work they did before the transformation. Ah well.

A pair of identical twins drive Two-Face to Rupert Thorne’s betting shop. One toss of a coin later, the three burst in with tommy guns and rob the place, though Harvey demands a diamond ring be left behind after another coin flip.

Thorne reveals it’s been six months since the last episode, and is sick and tired of Dent’s vendetta, putting a two million dollar bounty on his head (one million per face, of course!)

In a dream, a pre-transformation Harvey is chased across the rooftops by Batman and onto a rope bridge, where he blames Bats for not saving him. His face changes and he plummets off the bridge and into oblivion. Batman looks over the edge to see his parents in Crime Alley, also asking why he couldn’t save them. Heavy.

Bruce awakens in a sweat at the Bat Computer, with dozens of books and journals about psychology open in front of him. He wonders what Harvey has become and swears that he’ll save him somehow.

The police knock at Grace’s door hoping to find Harvey’s whereabouts. Grace confirms she hasn’t seen him once in the last six months, but ‘Detective Leopold’ is insistent he may try to make contact, leaving her a tracking device/beeper combo.

Oh but wait, it’s Candace in disguise! I did wonder why they went with a cop we’d never seen before over Renee Montoya. Sure enough, Harvey does a quick drive-by and looks wistfully out the window.

Back at his hideout, Two-Face diligently counts money, scolding his twin accomplices for being greedy. Opening his wallet to pocket some cash, he catches sight of Grace in a picture and becomes forlorn. His lackeys offer to bring her to him, but his coin says no so the matter is dropped and Harvey instead states his intent to finish Thorne once and for all. 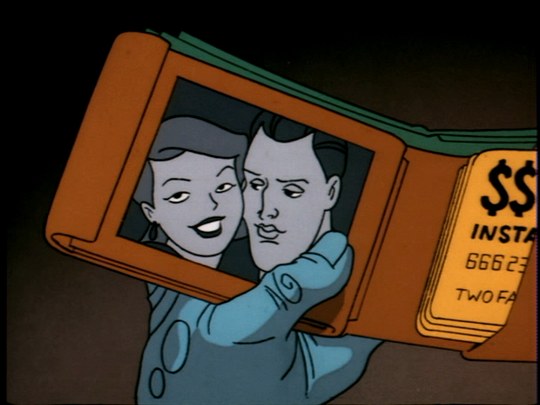 Batman shares a theory with Alfred about a pattern to Harvey’s crimes: all of the locations he’s hit have something to do with the number two and are owned by Thorne. Unfortunately he’s run out of viable targets, but Batman thinks he knows where he’ll go next, tearing off on the Bat Bike while Alfred warns him Harvey isn’t the man they once knew.

Two-Face breaks into the office of Thorne’s lawyer’s to obtain incriminating evidence that he had previously attempted to subpoena during his time as the District Attorney. Ya know, when Harvey promised to do to Thorne what he did to him, I really thought he meant he was going to disfigure him. But in fairness Thorne didn’t technically do that, so this tracks. 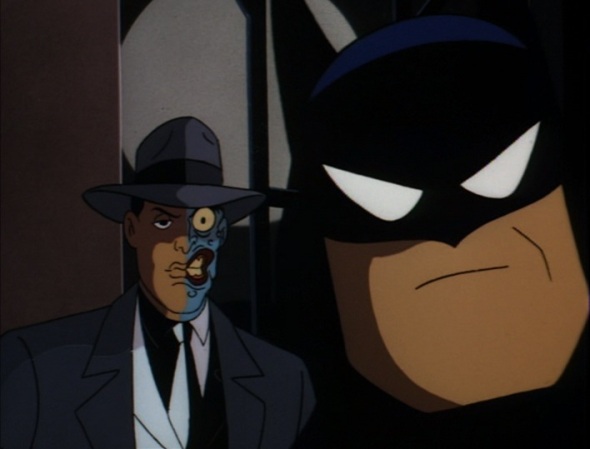 Batman arrives and breaks one of the twins’ wrist before pleading with Harvey to come with him. Two-Face violently rebuffs him until Bruce mentions Grace, which seems to calm him. Unfortunately the other twin arrives and the trio escape, knocking Batman out.

A janitor finds Bats and elects to wake him up rather than take a peek under the mask. A groggy Bruce examines the piece of Two-Face’s coat he tore off during the struggle, which contains a matchbook stylised to look like a black two of hearts playing card. I have never in my life seen hearts as any colour other than red.

Two-Face continues to be a sad panda, demanding his boys stop the car after they drive past a wedding shop. He flips his coin, and then we cut to Grace’s apartment.

She receives a phone call from Harvey who asks to see her, telling her to get in the car waiting outside in a neat bit of symmetry to the previous episode where he was asked to get in a car at around the same time. Grace tells Harvey she loves him and glances at the tracking device.

The car takes Grace to the abandoned Wild Deuces club (surely it should be called Deuces Wild) where she sees Harvey for the first time in six months, half a hood over his disfigured half.

He tells her his name is Two-Face, and that chance rules his life now. Grace claims chance didn’t make him the DA, and didn’t make them fall in love (there isn’t really enough time to get into that debate) and pulls the shroud off.

Harvey resigns himself to a scream that never comes, but Grace reaffirms her love for him instead. Before they can kiss Rupert Thorne and his men barge in and surround them. Grace realises she led them right to Harvey and feels horrible.

Batman speeds to the club in the pouring rain, lightning flashes illuminating his pretty dope helmet (safety first, kids!). He shambles inside, still feeling the effects of his earlier encounter with Two-Face, and a massive brawl erupts. Even Grace gets in on the action, taking down Candace.

Harvey points a gun at the incapacitated Thorne and then flips his coin, but Batman chucks a box full of silver dollars into the air that was stolen at the start of the episode. Unable to find his coin, Two-Face collapses to the floor in a despondent wreck. Wild how Batman Forever used this exact beat and couldn’t top a children’s cartoon made for a fraction of the budget.

Grace and an orderly lead Two-Face to a police transport as Jim Gordon asks Batman an oddly philosophical question about hope. His staggeringly optimistic response? “Where there’s love, there’s hope… but a little luck can’t hurt.” He flips a coin into a nearby fountain. It’s heads. Which is good!

It’s got to be Richard Moll again, though he was showing far more range in the first episode. He does get to reprise the pre-transformation Harvey briefly in Batman’s dream, but for the most part it’s all Two-Face, all the time. But that’s no bad thing, because his Two-Face voice is so incredibly distinct and intimidating. Many Batman villains are either deranged lunatics who cackle whimsically, or mobster stereotypes. Two-Face has more of a legitimately dangerous, rough edge to him, and Moll brings that out, making Harvey sound equal parts monster and man.

John Vernon is great as Rupert Thorne again, and I think Murphy Cross and Diane Michelle are excellent as Grace and Candace respectively, but it’s Kevin Conroy who comes closest to knocking Moll off the pedestal. This episode is as much about Batman’s desperation and vulnerability as it is Two-Face, and it only works because of Conroy.

I deliberated about whether or not to treat two-part episodes as a single entry on the rankings before I started this series to prevent them being split over consecutive weekends. Now that we’ve hit the first one I think I made the right decision. Part 1 is notably better than part 2, largely because of how compelling Harvey’s slow decline is compared to the slither of humanity that’s obviously still within him in this episode.

Harvey’s obsession with the coin is good stuff, and they do a fantastic job showing how much his change has affected Batman, which is made all the more powerful when you learn it’s been 6 months of in-universe time.

Grace and Bruce refusing to give up on Harvey despite everything is good honest comic book optimism, and Batman’s final line could not be further from the image that recent portrayals of the character have cultivated; a grumpy sociopath who loves punching criminals and wallows in his misery.

Many would attribute this lighter tone to the fact it’s a children’s cartoon, but I think that’s overly dismissive, and it’s instead more that Batman has been around for 80 years, and he hasn’t always been a total asshole. I would welcome a return to this more nuanced, human portrayal of the character. 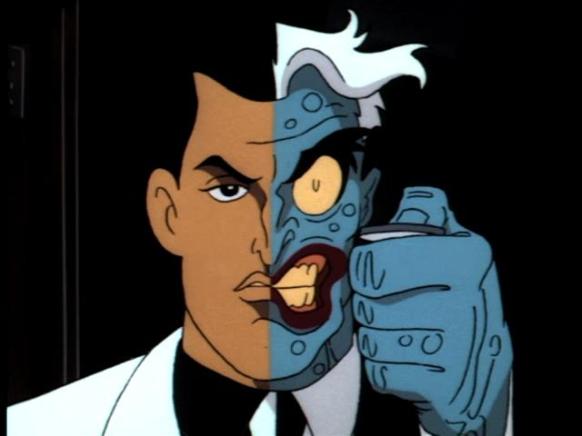 It could be argued that Two-Face was only in part 1 for a few seconds, but I would argue the Big Bad Harv persona is a part of the act, which is why I raved about the character last time. While I think he’s less interesting after escaping that hospital, he’s still a top tier Batman adversary.

His obsession with his coin and fixation on duality and the number two are the kinds of idiosyncratic ticks that make characters more memorable. The brief moments where Harvey seems to ‘still be in there’ play into the optimistic tone of the episode and the show overall.

Many question why Batman doesn’t simply kill his foes as they’re so clearly beyond redemption, but much of that is because comics can never end, and familiar names sell better than new characters, so prison becomes a revolving door and the same handful of villains take turns terrorising Gotham. But lost in that is Bruce’s earnest fundamental belief that he can save them all, and it’s even more pronounced when he’s dealing with his former best friend.

A few episodes ago I talked about how underrated Poison Ivy is as a villain, and how outstanding she is when written well. I think the exact same things about Two-Face, because he’s got such a simple gimmick, but there are seemingly endless possibilities. See The Dark Knight Returns or his small but thought provoking role in Arkham Asylum: A Serious House on Serious Earth for proof.

I can’t decide if Rupert Thorne is better, worse or about the same in Part II as he is Part I. Nothing he does here has any impact on his position on the list. He continues to be about as good as a generic mobster villain gets in a show that features a psychotic murder clown on a regular basis.

Speaking of my podcasts, There Will Be Movies has just covered Moneyball.