Plot summary: The Scarecrow terrorises Gotham State University and injects Batman with his fear toxin. Can Bruce overcome his nightmares in time to save the day?

Episode: Nothing to Fear

First episode to be story-edited by Sean Catherine Derek, who reported that her scripts were constantly tinkered with against her wishes. She felt the art department regularly overstepped their bounds.

One of the first instances of delving into Batman’s past outside of the comics.

Summer Gleeson (remember her?) interviews Dr. Long about a recent string of crimes committed against Gotham State University. Bruce Wayne joins the pair in an elevator, and the doctor – who went to school with Thomas Wayne – gives him a thorough dressing down for his playboy lifestyle and storms off. Bruce is visibly bothered by this.

Luckily Scarecrow and his gang invade a nearby bank, giving Bruce an excuse to suit up and punch his feelings away. Scarecrow unleashes his fear gas on an arachnophobic security guard, causing him to hallucinate a swarm of spiders. Scarecrow instructs his men to take what they can carry and then burn the building down, but a gas-masked Batman arrives to intervene. Being a resourceful fellow, Scarecrow doses Bats with a dart gun while he’s distracted, bringing the hero to his knees. Batman passes out in a ring of fire, hallucinating his father telling him he’s a disgrace. 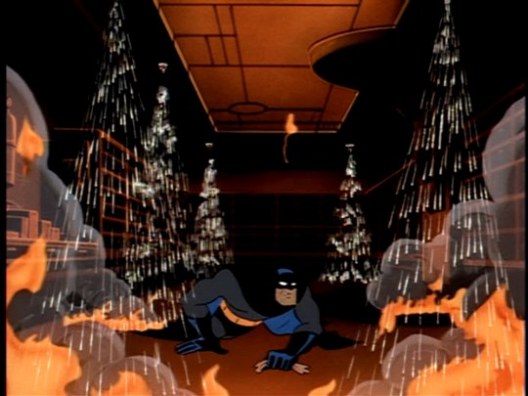 And that’s the end of the show!

Oh, no. The sprinkler system activates and Commissioner Gordon and his men arrive to help him out. Phew. Harvey Bullock is of dubious of Batman’s story, and the pair get physical over a piece of evidence (a torn scrap of Scarecrow’s mask). Gordon is none too pleased, but I mean… this is one of the more overt obstructions of justice our hero commits. Then again, ACAB.

Scarecrow reveals to his crew why he hates the university so much, having taught psychology there, with a particular fascination with fear. Shockingly, a boy who grew up chasing people with snakes and locking them in rooms full of bugs turned out to not be a very ethical adult, and was fired by Dr. Long.

Bruce is still shaken up by his dosing, continuing to hear his father’s words, and fixating on Summer’s use of the word “failed” during her news report. Alfred does his best to snap him out of it, drawing a parallel to his own habit of dressing up and scaring people, assuring him his father would be proud of him, and insisting he have chicken soup and a good sleep. Alfred ❤

No rest for the wicked though, as Scarecrow hits a fundraising event, gassing the room and kidnapping Dr. Long (who is scared of skeletons). Batman tries to intervene, but the fear toxin makes his appearance terrifying to the guests, who start attacking him. He barely gets away, climbing aboard Scarecrow’s blimp (such blimps in this city) and causing it to crash into a nearby building.

Remarkably, it’s able to keep flying, and Bruce experiences more hallucinations as he dangles off the side, seeing Thomas as an enormous judgemental skeleton, repeatedly telling him what a disgrace he is.

Finally overcoming the effects of the toxin, Batman takes down the last of Scarecrow’s goons and gets Dr. Long to safety just before the blimp crashes (again) in a fiery explosion. But what of Scarecrow? Well, he flies away in a weird little bi-plane because of course he does.

Running a scan on the piece of Scarecrow’s mask he recovered earlier, the Batcomputer determines it was made by one of five local corporations. Batman cross references employees of these five companies with Gotham State University graduates. There is only one: Dr. Jonathan Crane, specialist in fear and phobias. How atrocious is the job placement rate of this university???

Crane laments his narrow defeat, removing his mask in order to fully rue his misfortunes… only to fall victim to his own gas, silently released by Batman. He hallucinates giant bat monsters and cowers in terror.

Bullock bets Gordon his badge that Batman and Scarecrow were working together, somehow missing Crane dangling from the world’s strongest ceiling fan, complete with a Batman logo on a piece of paper affixed to his chest. 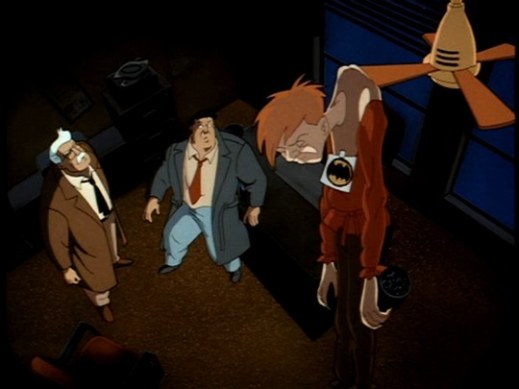 Did Bruce stop off at the cave to print this off or does he carry around a thumb drive with .eps files in case the need arises?

In a touching epilogue Bruce lays a pair of flowers on his parents’ grave and walks away, his shadow stretching out behind him and taking the shape of the cape and cowl. A layup, but layups are a highly desirable thing in basketball, so who mad?

Henry Polic’s original Scarecrow voice is solid, as British intelligence is always threatening, and he imbues it with some good whiney energy on top of that.

But it’s not in that upper tier of villain performances, so I have to give this one to Kevin Conroy again. There’s a reason he opens most of his public appearances with a rendition of “I am vengeance. I am the night. I… am… Batman!”

But beyond that he does a great job selling Bruce’s panic attacks, both in the moment and the lingering after effects. Vulnerability is a key component of an engaging character, and this kind of work is why Conroy is still performing this role decades later.

The production staff aren’t big fans of this, with Henry Gilroy having never written a cartoon before, and Bruce Timm and Sean Catherine Derek clashing over her revisions. I don’t know exactly what went on behind the scenes, but I’m inclined to agree.

Scarecrow’s motivations are pretty meagre, and I’m not entirely sure how robbing a nearby bank hurts a university. There’s also stuff like a blimp crashing and staying in the air and Crane being able to predict when Batman will experience another hallucination down to the second. Doctor or not, that’s a little contrived, even for a children’s cartoon.

I do like the brief window into Bruce’s psyche, which is more fragile than he lets on. It enriches the character, and also shows off the fatherly bond he has with Alfred. Best of all, he triumphantly overcomes the effects of the toxin and ends up embracing the terror he instils in his foes, with his grim silhouette drawn to great effect in the climax.

But the connective tissue between these highlights isn’t strong enough to save it, so it’s our new bottom of the pile.

You know how a lot of Batman villains have a sympathetic backstory? Well, Scarecrow does not. He was a creepy little child who tortured animals that turned into a creepy little adult who tortured his test subjects. As motivations for turning to a life of crime go, getting fired from a university isn’t a fantastic one, but the hook with Crane has always been his fear toxin rather than the character himself.

Delving into the psyche of your main characters is always a positive, and hallucinations allow for things to get weird and wonderful. Flaming ghosts, giant skeletons, gargoyle monsters? Yes. Yes to those. It’s also interesting to see the unflappable Batman be reduced to a sweaty, quivering wreck, if only temporarily.

For this reason I have to place him above Man-Bat, who was extremely well deployed in terms of his slow reveal, but without much substance. Scarecrow at least has something to him, even if it’s not a very good something.

On an unrelated note this is one of my least favourite character redesigns in the Rogues Gallery. That’s not contributed to the ranking, but I’ve never cared for the look of this version.

Speaking of my podcasts, There Will Be Movies continues this Monday with The Social Network.

Jerome & Brian’s Pantheon Plus is underway looking back at some trilogies and throwback movies.