Plot summary: Batman investigates a string of break-ins at pharmaceutical companies, leading him to the terrifying Man-Bat. Somehow neither sues the other for gimmick infringement.

Hello and welcome to my ongoing trip down memory lane with the undisputed king of superhero cartoons, Batman: The Animated Series. Seriously, the X-Men animated series that debuted the month after this one isn’t even the best X-Men cartoon.

I’ll be recapping episodes each Saturday and Sunday and building my personal ranking as we go. Spoilers in advance: I don’t think ‘Heart of Ice’ is going to be my number one.

Also just to get it out of the way now so I don’t repeat myself 85 times: the opening titles are among the best in history, the score is fantastic, and the art style is superb.

This was the intended first episode of the series, but the popularity of Batman Returns led to the network insisting ‘The Cat and the Claw, Part 1’ lead off the broadcast season. I’ll be sticking to the intended order if you hadn’t guessed

Alfred is voiced by Clive Revill (aka The Emperor) here rather than series regular Efrem Zimbalist Jr. (what a name!) Revill only performed the role three times.

The episode title is taken from Cormac McCarthy’s Blood Meridian. 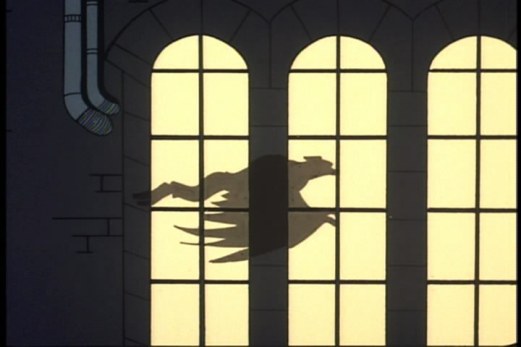 SOMETHING is flying around the Gotham skyline. Something with bat wings. Something that infiltrates Phoenix Pharmaceuticals and terrifies a security guard who was minding his own business recording a radio audition into his Dictaphone. The unseen creatures tosses the guard out of a window, but he of course lands safely in water because this is a children’s show. I am 31 years old.

Assuming this Man-Bat is in fact Batman – and honestly, who can blame him – Detective Harvey Bullock pleads his case to Mayor Hamilton Hill to allow him to assemble a task force to arrest the masked vigilante. Despite Commissioner Gordon’s protestations, the request is granted, with District Attorney Harvey Dent promising to assist.

Anyway, Batman points to other recent burglaries (actually one is listed as a “buaglary”, which isn’t a crime as far as I’m aware) of pharmaceutical companies that didn’t get the front page treatment because nobody was injured. Alfred offers to postpone “Bruce’s” dinner with Bambi as Bats takes off to investigate the latest crime scene. Excellent attention to detail there with Bruce being referred to as a separate person.

‘The World’s Greatest Detective’ is spotted breaking in by a pair of lab techs making out in an empty room, so only gets a few minutes to analyse the evidence before he has to flee from Bullock’s task force, barely making it out with one of the cops in tow, saving both their lives from recklessly deployed explosives. I love this emphasis on detective work, crafty escape artistry and saving people, rather than pure punching.

Bruce takes his evidence to Gotham Zoo’s leading bat expert, Dr. March, who reluctantly agrees to analyse a hair, and then palms the billionaire off on his daughter, Francine, and her husband, Kirk Langstrom. The couple dismiss the idea the sound recording – which is very clearly a huge monster – could be a bat, making Bruce look like a big ol’ dumb-dumb. Which is frequently his goal when cosplaying as Bruce, so… win?

Unsatisfied, Batman analyses the evidence himself. Dr. March telephones to confirm the hair comes from a brown bat and the audio is of a bat and a starling fighting, but Bruce will have none of it as his computer ruled both of these assertions out. A good touch that he deferred to them in the first place because he doesn’t know what the hair belongs to, only what it doesn’t, so he respects the expertise of others, but can see through it when he’s being lied to.

Act three begins with Batman sneaking into Dr. March’s lab too late to witness Kirk Langstrom burning the evidence, but he does find some of the stolen chemicals. He confronts Langstrom who does a supervillain monologue about survival and cross-species genetics before transforming into the Man-Bat and attacking. This leads to an extended sequence with Man-Bat flying through Gotham while Batman hangs onto him for dear life via grappling hook. Bruce eventually manages to trick Man-Bat into flying into a wall and knocking himself out.

Reversing the transformation after analysing the chemical concoction, Batman returns Kirk to the horrified Francine. Oh, and Gordon managed to convince Bullock he was wrong about Batman’s guilt while they were giving chase in a helicopter. 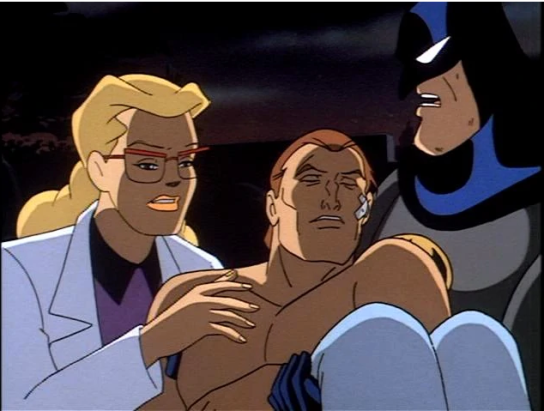 This is a battle between two actors doing multiple voices. I really like Richard Moll’s bored security guard doing little radio skits, and he’s pulling double-duty as Harvey Dent, a role he’ll get to expand on in great deal in the future. There’s a lot of range here, as the guard’s normal and radio personality voices are distinct from each other, as well as from Harvey. He also tosses in the voice of the Batcomputer for good measure.

But the thing Kevin Conroy is consistently praised for is his best-in-class ‘Batman voice’. Many actors have attempted this, with Christian Bale taking it to a ridiculous extreme, but none better than Conroy, and there’s something truly remarkable about seeing the Bruce voice coming out of Batman’s mouth when he takes a phone call. This is the most pronounced the difference will ever get, and it’s impossible to overlook such an indelible impact on the character. Plus he voices a blimp pilot, albeit one who sounds mostly like Bruce. 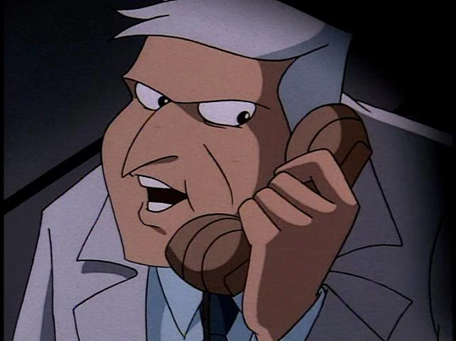 Obviously this is a default ranking for now, and while I don’t think this is in contention for the top 10, it is one of the best statements of intent I have ever seen from a show pilot. The immediate communication of the look and feel of the series, the rapid delivery of information about the villain, the interpersonal dynamics between the law enforcement factions, the relationship between Bruce and Alfred, the distinction between Bruce and Batman. All of this is achieved in five minutes.

It also puts a great deal of emphasis on detective work over extended brawling or wacky gadgetry, though both of those are present. In fact, Batman clinging on for dear life while an enormous bat monster flies between skyscrapers is one of the more thrilling things that will happen on the whole show.

Choosing Man-Bat as the villain of the very first episode of your Batman show is an extremely ballsy move. But that was entirely the point. Even in 1992, fans had seen a lot of Joker, Catwoman and Penguin, and for as much as the show owes to Tim Burton’s movies, there was a clear desire to establish their own identity. The series leans in a more supernatural direction than the movies, so giving Kirk Langstrom his highest profile appearance ever right off the… bat, was a high risk/high reward endeavour. It’s different, it gives Bruce something to unravel, and it gets you up in the air to show off the acclaimed Gotham City skyline that the art team painstakingly designed.

They also keep Man-Bat’s appearances to shadows and brief peripheral flashes for the first act, again playing into the visual palette and tone of the show. His transformation is pretty well animated, evoking classic horror movie imagery, and it’s a cool creature design.

Some more recent interpretations of the character have given him a more tragic bent, which would have been fitting given what’s to come with Two-Face and Mr. Freeze. They do a great job making the Man-Bat look ashamed when his wife sees him in this form for the first time, so the bare bones of this idea are there.

But overall there’s not a tremendous amount to the character himself compared to the mystery of finding him, and his mwahaha speech is rather generic, so in the long run he’s likely to act as the gatekeeper between the forgettable villain of the week fodder and the more interesting characters. 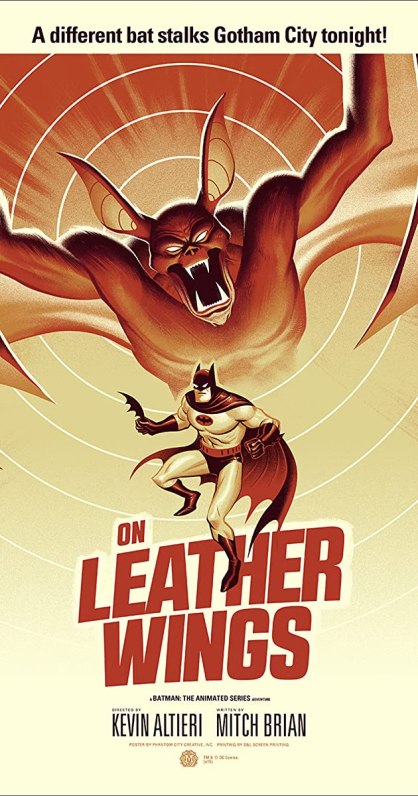 Speaking of my podcasts, There Will Be Movies returns this Monday with a special watch-along episode devoted to Scott Pilgrim vs the World.

Jerome & Brian’s Pantheon Plus is underway looking back at some trilogies and throwback movies.