Ben Phillips & Matt Waters just won’t stop podcasting, which is fitting given the title of this mini-series devoted to Damon Lindelof’s TV continuation of the most acclaimed comic book of all time.

Somehow, someway our journey has reached its terminus. The table has been set, all the key players are finally together, TWO separate maniacal plans are afoot, and against all odds all roads lead to Tulsa, Oklahoma. Did anyone do it thirty five minutes ago? Will anyone refuse to compromise? Will Lube Man’s identity be revealed?! Find out for the last time.

The Reel World Podcast · Nothing Ever Ends – A Watchmen Podcast: Episode 6 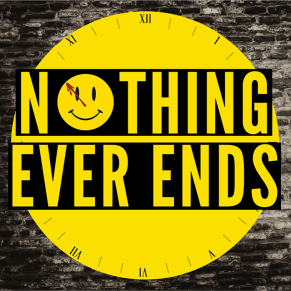 If this was your first time experiencing the dulcet tones of Ben & Matt then why not check out their other podcasts: There Will Be Movies, Ben & Matt’s MARVELlous Journey, Countdown to Destruction? and Secret Agent Men.

The Superhero Pantheon continue their descent towards the end of volume 2 with Spider-Man: Far From Home. (Come on, like they weren’t going to end on Endgame.)

Be sure to stay tuned to Kevin’s Flooping the Pig, our Adventure Time podcast, as two episodes from their archive are uploaded every week ahead of new episodes coming pretty soon, actually!