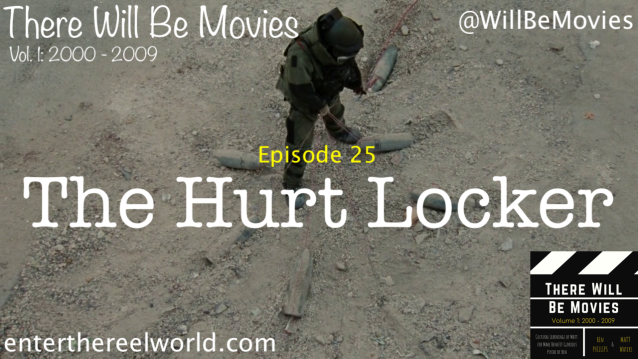 Ben Phillips & Matt Waters present 25 of their favourite movies from a given decade, kicking things off with Volume 1: 2000 – 2009.

Our final episode of Volume 1 is finally here, so it’s about time for us to ship out, much like Bravo Company and their tour of Iraq. Celebrate the impending New Year with your fun time pals, James, Sanborn and Eldridge, and of course your loveable hosts as Matt has to watch ANOTHER war movie!

As mentioned, Ben and Matt made their own ranked lists of every movie discussed in Volume 1 on Letterboxd for you to violently disagree with.

If this was your first time experiencing the dulcet tones of Ben & Matt then why not check out the podcast series they did on The Marvel Cinematic Universe and The Leftovers.

Christmas may be over but that doesn’t mean you can’t still check out the annual Reel World Christmas special with Matt and Mike Thomas.

Heck, The Superhero Pantheon even got in on the act with a Christmas episode of their own this year. Enjoy it while you can as there will be no regular episode next week to make room for the final(?) episode of Mars Investigated!

Be sure to stay tuned to Flooping the Pig, our Adventure Time podcast, as two episodes from their archive are uploaded every week ahead of new episodes in the new year.

Finally, we have a tonne of coverage of Star Wars Episode IX: Rise of the Skywalker. Mike wrote about the ONLY four things he liked about it, Jerome chimed in with a few thousand words and coming in the next few days Mike & Matt will have a podcast on it.