Watching “The Long Night” live led to a lot of emotions as the episode unfolded. While I was tempted to write about something that night, I recognized that a little of time and a fresher re-watch a few days later would my writing more justice. With that in mind, after two watches, here are The Good, The Bad, and The Really Fucking Stupid of the most expensive episode of television ever.

Let’s get the most obvious one out of the way. Arya has been training with the most lethal fucks in the world for seven years for this moment. She was the most qualified to kill the Night King. The fact that it was not obvious that she would be the one from the outset only speaks to the biases of the audience (including myself) as a whole. Great stuff!

For a character that mostly was not really a character for a really long time on the show, it was surprising to see her get such a fitting and poetic conclusion to her arc. Everything she *knew* to be true was proven false when Stannis Baratheon fell. Here, she got a chance to finally be right about a few things and basically helped to save the entire world.

The Demise of Lyanna Mormont

“I wish you good fortune” are sadly the words of a doomed character in the world of Game of Thrones. While announcing Lyanna’s death the previous episode was an unusual move given the certainty of death for at least some of the characters, anticipating the death of the greatest character in the history of television only made her scenes more tense and horrifying. The fact that she got to go out killing a giant was frankly as good of a death any character on the show ever got, and it’s something we should all aspire to.

Game of Thrones is a show written by very dumb people and about very dumb people, and this was an example of characters acting incredibly aware that they are in a zombie apocalypse film for at least 80 minutes. It’s the small mercies in life that really make it easier to keep living in this world.

Jon’s Useless Final Charge to Save the Day

Despite issues in the episode distracting from the emotional investment in the final moments, Jon’s useless charge into Winterfell to save Bran was pitch fucking perfect. It was set up as the classic hero charge to save the day, and it was instead completely useless. The way Jon was forced to see all of his friends helplessly near certain-death but forced to ignore them and allow them to potentially die was lowkey one of the most chilling moments in the episode. Then when Jon realized that he was far too late and had no choice but to SQUARE UP 1V1 with a dragon was exactly the right kind of stupid that has made Jon Snow always ever-so slightly more endearing than annoying.

The Return of Sandor’s PTSD

Much like at the Battle of the Blackwater, Sandor Clegane was a fine killing machine until the moment fire got involved. While this very much feels like “Hollywood PTSD” instead of some medically accurate version of it (I really have no idea either way), Arya being the reason he was able to snap out of it long enough to rejoin the battle was very sweet and a rare feel-good moment in this episode.

For a character (if not an actor) introduced all the way back in season 1 but who had only appeared in a handful of episodes throughout seasons 3, 6, & 7 before this final season, Lord Beric really got a nice arc and far better goodbye than a show of this scope theoretically had time for. He led men for a long time on a path of justice as best he could for as long as he could. He was convinced that The Lord of Light had a purpose for him, and he managed to die by saving the person who killed the Night King and ended The Long Night.

“Any Final Words?” No

Edd, Beric, Theon, Jorah, and Melisandre all died in this episode. They all got moments when they could have had some cliche final words. Instead they just…died…which feels about right. In fact, you could argue silence was a motif throughout the whole episode. There was very little dialogue throughout as it was: beyond the actual death scenes and of course, The Night King – the show’s literal embodiment of death, is always perpetually silent. Welcome to my middle school English paper. In this paper, I will attem— 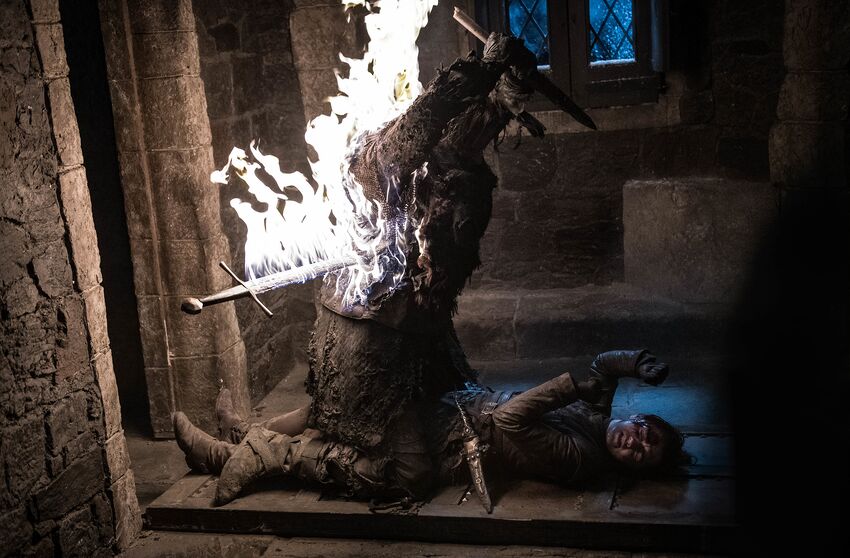 In some ways, this sequence encapsulated a lot of issues with the episode overall. It was really engaging to watch, but it brought up so many questions to render a lot of the excitement meaningless. Why were the zombies moving so slowly based on what we have seen them do this episode? Why are the zombies actually “looking” for a person as opposed to just mowing down everything in sight? How is that the perfect amount of zombies managed to break away from the main action so as to be there to look for Arya yet fail to find her but not enough to just completely overwhelm this library so that Arya is overrun and can no longer play Cat & Mouse? I don’t know.

In this episode, the zombies kept going back and forth from unstoppable rampage to slow-motion “walkers.” That is theoretically not too much of an issue except for the fact that there appeared to be no rhyme or reason for those changes beyond whatever was needed for each character to survive at any given time. As such, it was really hard after the initial onslaught from the zombies to give a legitimate reason as to why they did not just mow through the entire army and leave the field open for the Night King to kill The Three-Eyed Raven in about 20-30 minutes.

The only certified excuse would be that they could not just jump over the wall. In the episode though, they really start pouring over the wall relatively early (at around the halfway mark), and then the Evil Dragon actually blows up one section of the wall (why not all sections of the wall?). At those points, it really should have been all over for the armies of Dany and Jon. By having those moments happen so early in the battle, it really cut the tension by having everyone fighting for the living survive so long for no clear reason.

Theon Greyjoy is not a Good Man

Giving Theon Greyjoy a chance to at do some things at the end of the world to pay back some of the sins he committed was always a fine idea. To actually have The Three-Eyed Raven declare him, “A Good Man” was a bridge too far though. At best, Theon was pitiful. At worst, he was a child murderer. Luckily, Alfie Allen has never exactly been a charisma dynamo so his redemption story has never felt too over-the-top because honestly, how can anyone really care about Theon at this point.

Seems like a pretty big oversight when you’re fighting a dude whose main magic power is turning dead bodies into his undead soldiers. I can see them deciding there was no better place to hide the people who could not defend themselves properly. I can’t see them not accounting for the dead bodies down there. The core issue brought up time and time again on the show is that every dead human is a future soldier for The Night King. It felt like the lack of plan was more about hoping the audience forgot.

The Dothraki and The Unsullied, already hashtag problematic enough, being used as sheep to be slaughtered by the zombies while all the white people got to live…yikes! It would be in THE VERY FUCKING STUPID category if it was not so par for the course with the show that it should just be assumed that’s how they will handle these things without the slightest bit of self-awareness. Please let their The Confederacy Actually Won television show happen. It’s going to be the stupidest fucking thing.

This was one of those ideas that made more sense in the bubble of the episode than within the context of the entire show. If “The Long Night” was the very first episode of Game of Thrones that you have ever watched, then this scene probably worked exactly as they hoped. You have this impressive looking cavalry. Their swords lighting up on fire seemed to give everyone a naive sense of confidence or small ray of hope. They charge down the enemy, and The Light is slowly but completely extinguished.

Wow! What a way to establish that the evil zombie army is unbeatable…something the characters in the show ALREADY KNEW!

In the context of the actual fucking show that it took place in though, it made abso-fucking-lutely no sense. It had been firmly established that the biggest tactical advantage of Winterfell was that penetrating the castle walls was next to impossible. It had also been established that the zombies literally slaughter everything in seconds. To actually *plan* on sending out the Dothraki on what could only be described as a needless suicide run was so goddamn stupid.

Jon, Dany, Jorah, Jamie, Brienne, Podrick, Tormund, Sam, Grey Worm, Gendry are all facing physically impossible to survive scenarios in the closing stretch but then only Jorah dies. It was also all done in the most annoying manner as they would show a glimpse of all the main characters completely surrounded, the show would cut away, and then later show that everything is less bad for those characters.

The most glaring example was at one point Jorah was fighting off one zombie while Dany stared down five zombies charging head at her, a mere few feet away. The shows cut away. We come back, and apparently Dany survived that! What??? Things like that actually ease the tension of the episode instead of increasing it.

I still do not fully know how I feel about this episode. On one hand (and as seen above), there are clearly a lot of things that happened that I enjoyed and took some measure of satisfaction from. On the other hand though, there are so many core storytelling issues at work that really took me out of it, and my reaction upon a second viewing does not leave me optimistic about how well the episode will age. Once everyone on the front line survived that initial onslaught except fucking Edd, I was immediately emotionally disenchanted upon re-watch. That does not bode well for future viewings.