I like the Marvels for what they are: fun, easy-to-watch movies. They don’t really contain the charm of the original Star Wars or the pathos of something the original Lord of the Rings movies (two series of films I care more about). They are instead their own thing.

They are not above reproach though, and obviously something as large and ungainly as Endgame was always gonna have some glaring issues. While some of those issues were either expected or past mistakes redone (why no story for the surviving Okoye, was there no way around bringing back the white washing Tilda Swinton character, corporate feminism action sequence, etc.), some of the big picture cynicism on display in the film was more extreme than usual for the series. Let’s dive in to the four biggest examples of it.

1. The deaths of Thanos 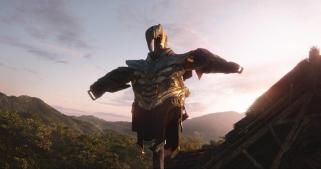 After The Snap left its impact on the world both fictional and real, it was predictable that the Avengers would have to take the fight to Thanos to undo The Snap wherever in the universe he decided to watch that sunset. What was not predictable was that that confrontation would not result in any obvious path forward to undo The Snap and that Thor would just really quickly and anti-climatically chop of the head of Thanos with one swing of the ax.

While it was unexpected, it was also incredibly refreshing in the context of the MCU that mostly feels like it plays things safely and never strays too far from the formula. It was actually the perfect start to the movie and really teased what could have been an incredibly weird and more interesting movie. Now, the time travel stuff certainly at least injected some much-needed weirdness into this comic book movie, the MCU entry in the end still required a end of the world cgi battle conclusion where they had to kill Thanos in a far more traditional sequence for the MCU. They literally rewrote the rules of the universe in this film and could have done anything with the conclusion to Thanos: and they really just did what they always do for all intents and purposes.

After countless films teased genuine stakes for the heroes in this universe, it was clear that Endgame would almost maybe definitely result in some of the cornerstone characters dying. Black Widow’s death seemed, if nothing else, less assured than Tony Stark’s for example and had a certain amount of shock value. She was a beloved character despite always kind of being stuck in the utility player position for the movies as she always had to be delivering what the films need in any particular outing despite what might generously be described as characterization inconsistencies. In that sense, it’s almost fitting that her death felt much like an afterthought instead of being a traumatic moment.

The failure in the presentation of her death was three-fold. For starters, she died just like Gamora “died” in the previous film. We may not have known how exactly Gamora would somehow end up alive by this point in the film, they were clearly heading in that direction though already. That kind of took the wind out of the moment.

Secondly, the classic “Vormir Choose Who Dies” conflict being with Hawkeye was not ideal. On one hand, their friendship is clearly kind of sweet (and damn near comes close to humanizing the natural villain, Jeremy Renner), but it’s a friendship based on an almost entirely off-screen relationship and history. Way more emotion could have been mined from this interaction taking place with Cap or even Bruce.

Finally, her death really just got run over by the time in the movie when it happened. An out-of-nowhere death in the middle of a “war” film can truly feel earned and really reestablish the chaotic tone necessary to capture the feeling of war. The idea can then be to deal with the fallout of the death at the end of it like soldiers are often forced to do. There was no real time for that though at the end because…

3. The real goodbye being for Robert Downey Jr. and not Tony Stark.

“I am Iron Man.” In an age of superhero films where characters were always associated with hiding behind masks and/or secret identities, it was that line to close out Iron Man that really told the world these Marvel movies (whatever they ended up being) would be something different than what we’ve seen before. For Tony the character, declaring himself out in the open was the start of the universe taking Earth more seriously as a potential threat. Saying those words here then became the moment the biggest threat Earth has faced so far was finally vanquished for good. The words that gave birth to Iron Man are the same words that brought death to Tony Stark.

All of that was good.

Then the fallout of this Infinity War happened. The mourning afterwards was entirely focused on Tony Stark which kind of seemed odd given that without Nat’s sacrifice, the plan to save trillions of people the universe over would have failed long before it even had a chance to properly start. It was taking me a while to crack why this glaring omission was such an issue beyond the obvious. Then I put it together.

While the story was of course saying goodby to Tony Stark, those post-battle sequences were if anything more about saying goodbye to Robert Downey Jr. You see, Black Widow may be dead in 2023, but Scarlett Johansson is still sticking around for her own film. The lack of genuine mourning for Nat was not just frustrating in screwing over her character, it also left you feeling cold because these films are about celebrating their own existence more than anything else. Tony’s death is the big death not because his actions were more important, but because it’s an actor not acting in the films again. It is the same reason that the death of Thanos can’t stay being as sudden or as chilling as it was when Thor lopped off his head. The real death of Thanos comes at the end when the film gets to celebrate the accomplishment of stuffing as many characters into the same battle scene.

And it’s also why Captain America can’t just go silently off into that good night or talk to his actual near-century-old best friend.

4. The literal passing of The Shield

Given that they were willing to end on a shot on Cap finally getting that dance with Peggy, it was really depressing how they chose to spend the final moments before we got to see that. It was the perfect setup. Captain America went on a solo time travel mission. He was supposed to be back in five seconds. The characters look up, and he’s not there (maybe just the shield could have been there). Cut to dancing. Fade to black. Beautiful.

They could not do it though. Instead they had to set up the next film or the next Captain America to be more specific. The groan-inducing nature of this sequence was given away by the moment when Bucky, Cap’s oldest friend in the world, declines to go talk Old Steve so that Sam (???) can go over to talk instead. It was a forced moment that made absolutely no sense until you realized why the film actually needed him to be there.

Much like almost all of the Marvels released in the last six years, Endgame contained a lot of fun and some truly memorable moments. This one even had the benefit of the film’s willingness to dip its toe in the water of the weird which was something most of the other Marvels did not get the luxury to do.

The big issues discussed above though really hallowed out some of the core emotion that could and should be at the center of the film. And there was just no justifiable reason for it. People are going to show up and care about the movies at this point no matter what, and they seem okay with just never doing something that may hint at endangering that. In other words, the Marvels seemed to have settled for being what they think they are meant to be instead of taking a deep look in the mirror and trying to decipher if they instead should be something more.