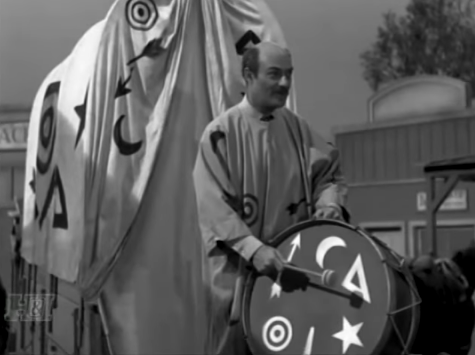 With four years of Donald Trump the President of the United States on the horizon, we are all going to have to find some ways to cope. My way is certainly just about the least productive possible. I will be searching for movies that provide some sort of catharsis for myself. It’s self-indulgent to the last degree, but we all need a little something.

What in the ever-loving fuck?

There was a fifties Western television series (Trackdown) that had an episode called, “The End of the World.” In this episode, the series’ main character, Hoby Gilman (played by Robert Culp), visits a town that has been left shook.

Why has this town been left in such a state of despair? The end of the world is coming of course.

Why does this town believe this? A man actually named Walter Trump (played by Lawrence Dobkin) rose up out of nowhere and claimed that the world was going to end and that only HE had the power stop it.

The people immediately fall in line and believe every word that he said. The outsider, Hoby, is the only one to call Trump out on his lies. How does Trump respond when Hoby calls him out?

Trump actually threatens to sue him.

The cops of course rally behind Trump. One of them (who is proven to be in on the scheme) asks Hoby rhetorically, “Can you prove he’s wrong?” He then says to Hoby, “It’s a lot safer to go his way than yours.”

Hoby tries his luck with the local judge who meekly stands by and says there is nothing that can be done. He warns Hoby, “Anyone who tries to change their minds might get hurt. They’re not going to believe you.”

The judge uses an apt metaphor though to at least shed some light on the situation. He explained that as kids, you’re often afraid of the dark for no rational reason. You then grow up and stop being afraid.

“A Big Lie can make us all kids again.”

The story does not stop getting weirder from there. Walter Trump actually calls his device (which is simply a parasol) a “Wall” that will protect everyone from the outside danger.

As soon as Trump gets a bit of power, he punished people monetarily for there being a single vocal doubter (Hoby). That frightened people into mob violence. Hoby is attacked for providing any resistance.

When Hoby finally corners Trump, it’s revealed that our snake-oil salesman’s instincts are to buy people off. The idea clearly conveyed is that most people have been content to just sit back and take his payment in exchange for keeping quiet.

Hoby continued to resist though and recognized that proving one lie was not enough. Everything had to be a lie for people to stop believing Trump.

One thought on “The Trump Era Films: Trackdown – “The End of the World””