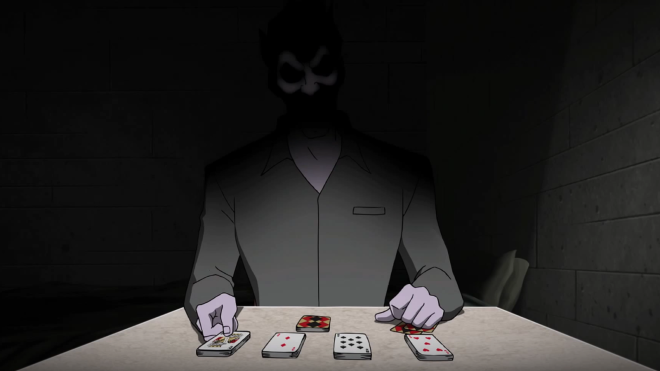 2017 will see me watching some films that I have never seen before and then writing about them. It will be a series of columns cleverly called, “2017 First Watch.

The Killing Joke was an infamous comic written by Alan Moore. The book has gone down as both a hugely influential and impact Batman story while also developing a poor reputation for the objectification of the Barbara Gordon character in the course of telling the Batman vs. Joker story.

This adaptation of the story, to its credit, clearly tries to course correct. Instead of just letting Barbara Gordon becoming a object for physical violence, they dedicate what basically amounted to a prologue about her to start off the adaptation. The first thirty minutes or so is basically entirely about Barbara and the build to her decision to quit being Batgirl before the events of The Killing Joke take place.

While that must have seemed like a great idea in theory, its execution actually somehow made the story even more troublesome.

The dynamic between Batgirl and Batman was clearly characterized as being very paternalistic. This was actually justified within the story by having Barbara continuously needing to be saved by Batman as her instincts were proven wrong at several points.

Barbara was also arguably portrayed to be romantically conflicted about Bruce in conversations with her friend at a library. Her friend states that she likes “bad boys.” In other words, Barbara Gordon, in limited screen time is getting defined by her attachment to a man in her life.

Barbara conveyed genuine appreciation (“It’s kind of flattering”) at being repeatedly complimented by the psychopathic criminal (Paris Franz) that is causing problems in the first half of the film. It was beyond bizarre to see her being flattered by his compliments without any real sense of irony.

Barbara’s prologue comes to a head when she fucked Batman. This ruined everything for their partnership. She is punished for them consenting to have sex with each other. She lost out on getting to be Batgirl which she dearly loved and then the story punishes her by paralyzing her.

To create a story where Barbara Gordon SHOULD be in a paternalistic work dynamic for her own good and where she sexual choices are portrayed to be self-destructive was just absolutely absurd.

It was incredible to watch this adaptation unfold. The Killing Joke was always going to be an uphill battle to adapt, but they actually managed to find a way to make it more fucked up. Oof.

One thought on “2017 First Watch: The Killing Joke”