At The Reel World, we believe instead of paying us money to listen to and read our mundane thoughts on popular culture, you should give back what you can to people who need it. I suggest supporting The Manna-hatta Fund. “The Manna-hatta Fund presents an opportunity for all settlers to support the Indigenous peoples, such as the Lenni Lenape, who were forcefully displaced by European settlers and their descendants to create New York City and the United States.” Follow the beneficiaries on Twitter: @AICHNYC

Despite being bookended by a season premiere that was one of the show’s best episodes ever and a very strong season finale, season 11 of Curb appears to be (at first glance) the clear weakest season of the show so far. There were just too many weak episodes and the season’s two main storylines never really connected fully. Larry is simultaneously trying to get a new pilot off the ground (a plot that had SO much promise). He however fucks it up by getting stuck casting a non-actress for a lead role because the family is threatening to sue him over not having a fence surrounding his pool which led to the death of their relative. Convoluted yes, but the issue was the fence storyline then got taken over by Larry being in an extended relationship with Tracy Ullman – a city councilwoman he hopes to have help him out. While the Ullman stuff was fine, it took much away from the more promising pilot storyline that seemed to just be forgotten.

Post the high of The Producers season, season 5 felt a bit aimless while also not having a story to build on from episode to episode. Yes, Richard Lewis needed a kidney and Larry thought he might be adopted but that did not give him the cast of supporting characters that enhance the show best. Instead it felt like the show was losing its fastball. Luckily, it seemed that David recognized that and really turned up the heat with the following two seasons.

While this was clearly a relatively weak season* that confirmed the idea that the show benefits when it has some coherent serialized storyline to tie things together, it does have some strong points. Larry being forced to get on “the juice” in order to compete with Rosie O’Donnell in the bedroom was clearly the highlight. Everything about Larry’s orgasm-causing car and Michael J. Fox was also quite great.

This season was very good but definitely felt like Larry figuring out what the show was still. The most noticeable about this season is how often Larry is right about the crazy situations he gets caught up in but his reactions make him the villain. My memory of the show before the re-watch was that he was always the villain but really the early goings mostly feel very different.

After some promising bits in the first half of the most recent season, it seemed like the return season of Curb was gonna be towards the bottom as far as Curb seasons go. The second half really turned things up a notch though as the show leaned more into the Mocha Joe rivalry/Spite Store storyline. The story really brought out some of the funniest/most insane Larry characteristics and led to many highlights including everything connected to Ted Danson and Jon Hamm. Speaking of which, all I want for season 11 is for Jon Hamm to move in with Larry and Leon and join the gang.

After six years off, Curb came back firing mostly on all cylinders. The key dynamic was in place for a strong season for them which always involve a healthy mix of strong standout moments/episodes along with a broad serialized story that holds everything together. Some of those great moments include: 1.) Larry and Chet Hanks in a revolutionary cosplay scene; 2.) Making fun of Lin Manuel Miranda proves Larry is as always at the vanguard (whether he realizes it or not); 3.) Finding a reverse “Seinfeld Finale” ironic structure where there was an episode where they brought back a lot of past “victims” Larry only because Larry was “right” about all of the instances he earned himself a pardon regarding the fatwa. And the Fatwa itself being an effective season-long story of showcasing Larry and all his worst but most hilarious qualities.

The premise of this season was simple but brilliant. Larry David desperately needs something to occupy his time, and thus he needs to start writing again and making a show. This first leads to him trying with Jason Alexander and predictably failing over some nonsense. Then a show with Julia Louis-Dreyfus looks closer to getting to reality but of course Larry ruins things again. Larry’s sense of self-destruction despite life tossing him softballs is one of his defining characteristics and it was on display perfectly here.

4. Season 4 – Larry Stars in The Producers 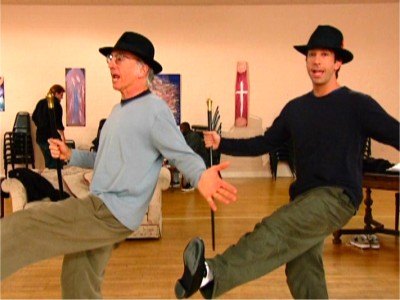 Much like the restaurant season, Larry getting ready to star in a Broadway play created an ensemble for him to play along with including Mel Brooks, Ben Stiller, and David Schwimmer. This story also improved on a rare faux pas made by David in the previous season where he was supposedly doing a supporting role in a Scorsese flick: Mel Brooks was intentionally trying to sabotage his own play by casting David which made much more sense given David’s limited range.

3. Season 7 – Larry Does the Seinfeld Reunion 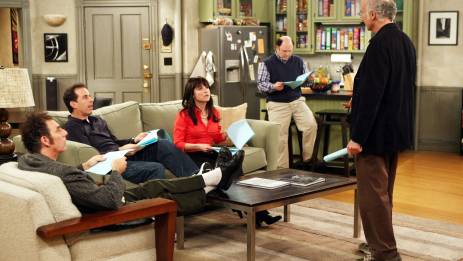 This season accomplished so much and had such a small margin of error that in some ways it can easily be considered the most impressive season. A fake Seinfeld reunion in most other hands would seem desperate and hackey. The easy solution was that it was generated by the character Larry David in truly a desperate moment. Not for some noble reason but instead in some misguided attempt to win back his ex-wife. Pretty much every aspect of this season was a homerun with the only drawback being they wisely did not overdo the Seinfeld aspects and kept you wanting more.

In the first half of the whole show, this was likely the peak of cringe aspect of Curb with the most unwatchable moments. The Restaurant storyline accomplished both creating a bit more of ensemble to play around with and direction. Larry had to interact with the same people on a semi-regular basis which is always ripe for hilarity as the world only gets more tortured by more consistent connections to Larry.

This season was fucking amazing. *Just* when things were potentially looking like they might get a little stale with the show after the (relatively) weak season 5, this season brought a shot of energy that other shows would not have understood they needed. J.B. Smoove and Vivica A. Fox brought their A Game big time (with Leon instantly becoming one of the funniest characters on television). Cheryl leaving Larry was way overdue. Ted Danson and Mary Steenburgen being more present was always great. And Bob Einstein joined Richard Lewis as a now-semi regular to deepen the bench. SO. GREAT.